What Makes a Good Tremolo Pedal?

Tremolo pedals are among the oldest and simplest guitar effects pedals that you can still get. Even so, the amount of impact they can have on guitar’s tone is so profound that tremolo is easily the among the most used modulation pedals today. The history of this effect has a lot to do with the way tremolos are perceived today. On one hand, there’s a large user group that insists on having tremolo in its most basic form, while on the other we have users who want to get more from this effect.

Whether you belong to the first or second group is completely up to you, but either way, you should be able to recognize a good tremolo pedal. Arming you with proper information to do so will be our topic for today. We will cover basic and advanced designs, telling you what to look for in each. With that said, let’s get going.

First tremolo effects actually appeared in vintage amplifiers. They were a feature that got popular almost overnight, which is definitely nothing strange considering that effects pedals weren’t really a thing at the time. Without going too far into how tremolos work, let’s just say that amp builders used them as an easy way to spice up the performance of their amplifiers.

If you’d like to know more about the principle behind tremolo effects, check out our dedicated article that deals with that subject in detail. ‘How Does a Tremolo Pedal Work’ Since not all amps came with a built in tremolo, standalone effects pedal versions of it quickly became available. That moment sparked what is going to become a whole lineage of different models and variations. 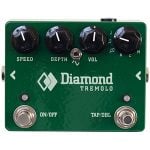 Some of the best tremolo pedals of today come in two different forms. There are your analog circuits and digital ones. As you can imagine, analog tremolos are much closer to the original design that started the whole story. They aren’t really rare due to the simplicity of an analog tremolo circuit.

Even though analog is usually associated with fewer features as it’s a bit harder to achieve some of them in a fully analog system, analog tremolos come with a wide range of additional options. Digital tremolo pedals are a lot easier to make, and a lot full of various features. With that said, there are good and bad models in each of these two categories. Knowing what to look for in a pedal of this type can save you a great deal of headache when you decide to go hunting for one.

What To Look For In a Tremolo Pedal?

In a lot of ways, tremolo is just an automated way of turning the volume of the guitar from 0 to 10 and vice versa. As simple as that sounds, there are several things that make a good tremolo pedal. The most basic versions of this effect feature a Speed and Depth knob. These two controls are going to be found on just about any pedal that belongs to this family.

Speed is going to dictate the frequency of the effect, and Depth is what determines how deep those dips in volume are going to be. Having a pedal that comes with only these two knobs is completely fine, but you might want to expand on controls a bit in order to get the best performance possible. One of the byproducts of manipulating the volume of your guitar in the way tremolo does it, is the false impression of your overall volume being lower than it actually is when you turn the effect on. Even though it is just an illusion, the listener will notice it. Most basic pedals of this type suffer from this issue and that is exactly why having a volume control is so essential these days. All you have to do is increase the volume on the pedal, and you will solve the problem completely.

The function of a tremolo effect pedal is based on a waveform. The default option is a sine wave that you can alter in terms of frequency and amplitude. However, most quality modern tremolo pedals allow you to select different types of waveform. This feature alone increases the versatility of the pedal and the effect itself. If you can, you should always look for a model that comes with this feature.

Stereo tremolo pedals are something else when it comes to the impact of the effect on your tone. Pedals which support this type of operations come with two different sets of outputs, essentially allowing you to hook them up to two different amps. In this kind of setup, you can adjust the phase of the tremolo as well, and achieve some pretty amazing results in the process.

With that said, stereo trem pedals are a very niche group that you probably won’t need. It’s a great feature, but no the one worth paying the extra cost unless you have a proper setup to support it.

The essential part of any effects pedal, including tremolo, is its core performance. When you strip down all the bells and whistles, is that pedal able to keep up with you or not? Being a very simple type of effect to produce by definition, you won’t find many bad tremolos around these days. We’ve mentioned some extra features you might want to look for, but even having a solid bare bones versions is going to take care of most of your needs.