Last Updated: May-08-2019
This was the first time we revisited our new banjolele page since we wrote it. We are pleased to say there was no call for changes and our original recommendations still stand! Check back soon as we’ll update often.

Whether you are channeling your inner George Formby or simply want to enjoy the distinctive happy sound of the banjolele wherever you go, you have come to the right place!

These traditional four-stringed instruments strike the perfect balance in style and sound between a banjo and a ukulele. While they rose to popularity during the 1920s and 30s, they are certainly back in style again in 2019.

In today’s article we will be running you through a selection of the best banjoleles on the market. We have highlighted a handful of models, ranging in price from budget beauties for complete beginners right up to high-end banjoleles for seasoned pros. Then stick around for a quick guide to banjoleles and what to look out for when shopping for one. We kick off this chart with a premium concert banjolele that, despite the higher-end price tag, is incredibly popular with both casual and professional banjolele players.

The Goodtime Banjolele from Deering looks beautiful and very distinctive, with intricate detailing and a quality American-made build. This banjolele features a slim satin-finished rock maple neck and an open-back construction, along with a sustain-enhancing patented bridge plate.

There’s an 11” rim on the body, which is made with a three-ply blonde maple ring, maple/ebony bridge and frosted top, which leads to a delightfully loud, rich and warm tone. It may be a little expensive for beginners, but this is certainly a banjolele to aspire to. Another high-end banjolele to grace our chart is the Banjolele-DLX from Gold Tone, which is a concert scale closed-back banjolele that oozes quality.

Aesthetically, Gold Tone has opted for a real vintage look with an 8” maple rim, an ebony fretboard with 15 frets, brass hardware and geared Grover-style tuners. It features a one-piece flange and deep-wall resonator, offering a rich sound with plenty of volume and that desired Formby-esque plunky tone.

The build and hardware clearly put this model in a class above some of the others in this list – the only problem is that the price reflects this. It’s not cheap, but it’s well worth the money for serious banjolele enthusiasts. The Oscar Schmidt OUB1 is slightly more affordable that the first few on our list, but retains a higher-end feel, which is typical of the Washburn subsidiary who always tend to impress with their instruments!

The closed-back OUB1 features a concert scale, using quality materials that lead to an enjoyable playing experience. There’s a mahogany resonator with a mahogany neck and bound rosewood fretboard, home to 18 frets, along with a Remo head.

The hardware is just as solid with a 12-bracket cast aluminum tone ring, responsive open-gear tuners with white pearloid buttons, and quality Aquila strings. Overall, the sound is beautiful – twangy like a banjo, but with a naturally mellow tone. A great midrange option! Did somebody say bundle? If so, this Banjolele Starter Kit from The Fretwire will be a worthwhile contender for your shortlist, as the banjolele comes bundled with everything you need to get up and running.

With an affordable price, the highlight of the kit is undoubtedly the banjolele itself – a concert-sized instrument featuring a mahogany back and sides, along with an 8” Remo head. The neck is easy to play, with a mahogany build and 18-fret rosewood fretboard.

The geared tuners hold tuning well and the sound is just what you want from a traditional banjolele. The fact it comes with a hardshell case, extra D’Addario strings, a digital tuner and a few other accessories is a bonus at this price! Sure, the name Kmise isn’t going to get too many people excited, however their affordable banjolele shows off some quality features that make it a very interesting prospect.

Firstly, for under $100, this set comes with both a softshell nylon carry case and a clip-on digital tuner, which certainly bumps up the value. The banjolele itself is a solid little instrument, featuring an easy-to-hold concert size, with a closed back (which can be removed), sapele used for the body, and a walnut fretboard.

Up top, you’ll find quality sealed tuners, which are a very good addition at this price. Whether strummed or plucked, this Kmise Banjolele sounds bright, crisp and twangy, with decent volume. This concert banjolele from Vangoa may be one of the cheapest on this list, but it sure doesn’t feel it! With a simple and clean design, the neck, back and sides are made of a mahogany-like sapele, which is satin finished for a smooth feel.

The top is covered with a thin plastic, which isn’t the highest quality, yet it still delivers the classic banjolele sound – plinky and plunky, and surprisingly full for a budget instrument.

Part of set, this closed-back banjolele also arrives with a strap, tuner, adjustment wrench, plectrums, a carry case, and even a pickup to allow you to amplify your sound. For under one hundred bucks, this is a winner! 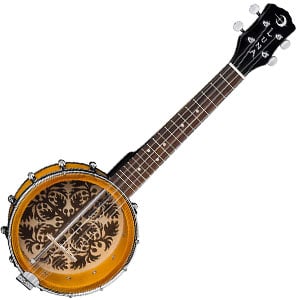 First up – you’ll be hard pushed to find a better-looking banjolele! This may be no surprise if you are familiar with Luna’s output, as the distinctive American brand knows how to spice things up in the aesthetics department.

While popular, the Luna Banjolele is not without its problems – namely in the quality control department – but with decent components, it proves a worthy consideration if you’re looking for a banjolele with a little flair.

This soprano scale model features a maple body with a mahogany neck and a smooth black walnut fretboard with 20 frets. The Remo head is clear, revealing intricate patterns on the backplate inspired by traditional Hawaiian quilt design. Very cool!

What is a Banjolele?

As the name suggests, and as we touched upon in the introduction, a banjolele is essentially a cross between a banjo and a ukulele – two of the happiest instruments around!

A banjolele is a nylon-stringed instrument that shares the scale, fretted neck, headstock and tuning (G-C-E-A) with a ukulele. However, where a ukulele features a wooden body to resonate sound, a banjolele uses a drum with a vibrating head to make itself heard – just like a banjo.

Also note that the bridge of a banjolele (often known as a floating bridge) is not fixed to the head with glue or screws, but is held in place by the tension of the strings.

And that’s a banjolele in a nutshell!

They tend to deliver a distinctive cheerful sound, which is traditionally described as ‘plinky’, ‘plunky’, ‘twangy’, or ‘honky’. Due to the design of the banjo head, banjoleles tend to be a little louder than a traditional ukulele. You can also usually tighten or loosen the head to create a higher or lower pitch.

You don’t need to look further than this video to get a better grasp on what a typical banjolele should sound like:

What to Look for in a Good Banjolele

Now we know what a banjolele is and what one sounds like, we can ask what makes a good banjolele and what should you look out for when shopping for one?

Size
Firstly, determine the size you want and you will narrow down your options. If you are familiar with ukuleles, the sizes of banjoleles won’t be new to you, as they too come in soprano, concert, tenor and baritone sizes. And, just like concert ukuleles, concert-sized banjoleles tend to be the most popular size as they tick a lot of boxes, such as offering a middle of the road tone and being easy to pick up and play for most adults.

Smaller adults and children may be better suited to the smaller soprano size as they prove easier for the smaller handed player to play. The tradeoff is that the sound is a little quieter and they are less rich in tone.

On the opposite end of the banjolele spectrum, tenor and baritone banjoleles are available for bigger players who find the other two scales a little too small. While the choice when shopping for these sizes is more limited than the other two, they tend to offer a richer, louder sound.

Back
When hunting for the perfect banjolele, you may see either open-back models or resonator models, which feature a closed back. Each style has its own tonal profile, with an open-back banjolele being typically brighter, while a resonator style tends to be mellower in tone but louder in volume. Note that, on some closed-back models, you can remove the resonator plate, offering you more versatility.

Material
Another variation you will often see is the material of the head. Not to be confused with the headstock, the head is the large disc that vibrates freely and gives the banjolele its unique tone. Traditionally these heads were made with calfskins although, in modern day manufacturing, they are more commonly synthetic. You can still find calfskin heads as well as plastic heads, although look for heads from the notable American brand Remo, who are known for delivering good quality banjo heads and drum heads.

Bridge Installation
Unlike a guitar or ukulele, the banjolele you purchase may require you to apply the bridge yourself – they don’t always come preinstalled. The installation process can be quite straightforward, although as the bridge must be placed in the right position, it can be worth taking the banjolele to your local guitar pro and asking them to do it for you (usually for a small fee).

You can now see that buying a banjolele isn’t rocket science. Providing you know which size you want and whether you prefer an open or closed back, you should end up with something that will work well for you.

The chart on this page isn’t a complete breakdown of every banjolele on the market, yet it should provide some inspiration. It should also give you an indication of what a ‘good banjolele’ looks like, what features it should include, and what you can find in each price range.

Now all that’s left to do is buy one, learn a few George Formby tunes and get playing like it’s 1945!