While this relatively new article held up well over the last few months, we decided to make a few changes to our buyer’s guide to make it even more informative. We also removed the older Ibanez AEL152ETBS and added two awesome jumbo 12-string acoustics – the bold Takamine GJ72CE-12 and the flashy Gretsch G5022CWFE-12.

Looking for an acoustic guitar with a full, rich tone? Or do you simply want to play Stairway to Heaven or Hotel California with that distinctive jangle? Whatever your reason for shopping for a good 12-string acoustic guitar, we have you covered!

In today’s article we are taking a look at 12-string acoustics in more depth, with a buyer’s guide as well as a chart to highlight some of the top models on the market today in all price ranges. Let’s dive straight in! Takamine's reputation is one of the best in the business. This is a brand you can turn to and trust completely. Takamine EF381SC may not be one of their most popular models out there, but it certainly brings that same quality we are used to seeing.

Compared to other 12 string guitars, this one is both a very reliable work horse and a true representation of what a high end acoustic guitar should look like. Takamine chose the solid spruce top along with maple back and sides.

EF381SC comes complete with CT4B set of electronics, which do an impressive job at capturing its natural sound. In all honesty, if you want a good 12 string, Takamine EF381SC is a no ­brainer.

Fans of a more classic design who want to get their hands on a great 12 string guitar need to check out Guild F­1512E. Made by one of the most reputable brands in the industry, this guitar offers a combination of great build quality, great materials and impressive performance.

You are looking at a jumbo body shape that features a solid sitka spruce top, rosewood back and sides. Needless to say, the volume is absolutely there as is tone definition. Guild F­1512E is great for live performances, both plugged and unplugged ones.

Guild has turned to Fishman for on board electronics, which as resulted in their Sonitone being installed on every F­1512E. Overall, this guitar meets and exceeds all expectations. Martin guitars require no specific introduction. This brand has been at the very top of the market for a long time now. Being an authority most of the industry looks up to has its benefits. Martin's more affordable segment saw a decent boost in both availability and versatility.

If you need an example just look at Martin D12X1AE. This is a reasonably affordable 12 string guitar that delivers what is now known as 'Martin tone' in a slightly different shape. It isn't quite traditional, but it makes up for it with great performance and even better hardware solutions.

By that we mean a complete Fishman Sonitone package which does a great job at reproducing the natural sound of this guitar. 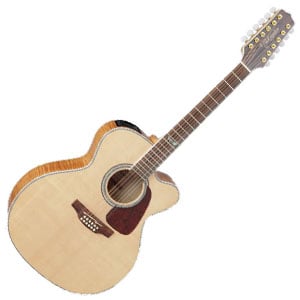 As we’ve already seen above, Takamine is no stranger to the 12-string market, constantly churning out high-quality acoustics in all price categories. The electro-acoustic GJ72CE-12 is a slightly more affordable model when compared to Takamine’s EF381SC, showing off a lovely jumbo body made from spruce and maple.

The Takamine-designed electronics are also worthy of praise. While the pickup is a little weak, the TK-40D preamp makes up for it with huge versatility and a nice amplified tone.

However, the unplugged performance on this jumbo is astounding for the midrange price – full, rich and bright, with no problem filling a room. There’s more on this cool 12-string in the full review of the GJ72CE-12. 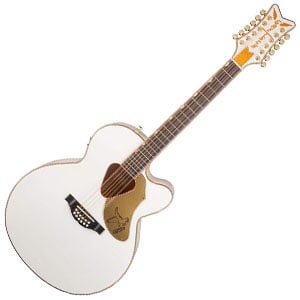 A new arrival to our chart is the popular Rancher Falcon G5022CWFE-12 from Gretsch – a brand that knows a thing or two about crafting a retro guitar with a bit of bling!

This 12-string model is packed with extroverted appointments, from the elegant white and sparkling gold color scheme to the eye-catching Falcon headstock. Under the paintwork, the guitar holds up well for its midrange price, with a solid spruce top and laminated maple body.

It’s not as big in projection as some other jumbos, but overall, it’s a solid choice for performers as the Fishman electronics offer versatility and a natural tone when plugged in. There’s more on the Rancher Falcon G5022CWFE-12 in our complete review. Canadian guitars are still riding the shock wave they have created a decade or so ago. We are talking about handmade guitars crafted in North America by some of the best luthiers in the world.

Best of all? They aren't exclusively priced. On the contrary, the prices are very much attainable. Seagull S12 QI is one such guitar. It's a 12 string model with solid tonewood all around, and a great little preamp system.

Build quality is superb and punches way above its category. The result is a guitar that sounds and plays impressively well considering the price. If you need a rock solid value for the money choice, Seagull and its sister companies are the obvious way to go.

In a market flooded with all kinds of tier 1 guitars, it is hard to see the forest from the trees. However, if you venture out deeper, you will find some amazing guitars. Alvarez AJ80CE­12 definitely fits this description.

We're looking at a jumbo body shape that features a solid sitka spruce top paired with maple back and sides. Amplification is ensured by a capable L.R. Baggs set of on board electronics, which perfectly mimics the natural sound of this instrument.

On top of all that, this is one very attractive guitar. If you are in a pinch and need to get a decent 12 string on a budget, we can definitely recommend the Alvarez AJ80CE­12 acoustic electric model.

Guild's ability to merge great performance with affordable price tags is pretty impressive.What is even more impressive is that you can find these models in categories which aren't really standard.

Guild F­2512E is a 12 string acoustic electric guitar that features solid sitka spruce top, mahogany back and sides, as well as a pretty solid set of electronics. Speaking of which, the preamp is Guild's own design while the piezo pickup comes from Fishman.

Even though other brands choose to use full Fishman or L.R Baggs systems, this particular setup has proven to be more than capable. Overall, Guild F­2512E is a great choice for performing artists who need something reliable and consistent that fits a limited budget.

What is a 12-String Guitar?

As the name suggests, a 12-string guitar is one with 12 strings, compared to a standard six-string guitar. The overall experience of strumming a 12-string model is very satisfying, with a chimey, rich and robust sound that you just can’t achieve with a regular acoustic guitar.

However, despite six additional strings the fretboard doesn’t double in width, as each of the original six strings essentially gains a little partner string that enriches the tone with a higher octave.

Look closely at a 12-string acoustic and you will notice that all of the strings are grouped into pairs. The lower four pairs (E-A-D-G) are tuned so that one string in the pair is an octave apart from its twin. The upper two pairs (B-E) are tuned in unison.

The first time you play one you will notice that the extra richness to the tone is much more forgiving – little errors seems to melt away into a world of overtones and jangle.

Here’s a good video to demonstrate the differences in sound and tuning:

The Benefits of Owning a 12-String Guitar

You already own a six-string guitar, so what will buying a 12-string acoustic bring to the table? There’s a saying in the guitar community that 12-string guitars are to traditional guitars what a grand piano is to your standard upright model. We can echo the sentiment.

As mentioned, each of the string pairs creates a rich sound, similar to a chorus effect you can find with an electric guitar. A 12-string guitar generally has a much fuller tone and an abundance of overtones emanating from the sound box, meaning you can achieve much more with less. Therefore, using one of these beasts will allow you to bring your solo performances into a richer environment where you can really express yourself.

Another benefit is the practice you get with these, which can be transferred into your regular six-string playing. It is one thing to have to squeeze a single string on the fretboard, but a completely different one when there are two strings you need to press perfectly in unison. Once you master how to do that, chances are that you will become much more proficient at playing a standard acoustic guitar.

Finally, a 12-string model allows you to experiment with tones and playing styles. After a while, some guitar players simply don’t feel challenged anymore and turning to a 12-string can restoke the fire of enthusiasm for guitar, as well as get the creative juices flowing.

Things to Consider When Looking for a 12-String Guitar

While there are benefits to owning a 12-string guitar, there are also a couple of drawbacks worth mentioning.

Firstly, a 12-string guitar is fairly different from your classic acoustic in a couple of ways. For starters, the headstock holds 12-tuning machines instead of six, meaning that changing strings now requires a much more tedious process. Of course, as these are specialist strings, they tend to be a little more expensive than regular strings.

The next thing to consider is the neck. As you have twice the amount of strings on what is similar to a standard scale neck, you are also going to have a much higher level of stress and tension. If you were to use a standard acoustic guitar neck, chances are it wouldn’t last too long! Instead, these guitars often have heavier, thicker necks, which can be uncomfortable for some people to play. Note that they often have double truss rods running through them, which means adjusting the neck or action on one can be a real nightmare.

The point of highlighting these negatives isn’t to scare you away from a 12-string model, but rather to introduce you to some of the differences you are likely to face. However, if you can deal with an initial learning curve and a bit more patience when it comes to string changes, a 12-string acoustic is well worth it.

While 12-string guitars are definitely a niche segment of the market compared to their six-string cousins, it is an ever-growing market as guitarists realize the appeal of adding a 12-string acoustic to their collection.

We hope the models we have highlighted today have inspired you, no matter what your budget or skill level. If you’re a musician who is interested in spicing things up, spending some time with a 12-string acoustic could be the best thing you ever did!