However, we can all agree that they’d have been nothing without the blissful sound of a highly-saturated electric guitar. Whether it was Angus Young’s trusty SG, David Gilmour’s famous Black Strat, or Slash’s Les Paul, we have the guitars to thank as much as the guitarists.

In this article, we have selected some of our favorite rock guitars on the market today – a good representation of the best guitars of all time. They span a range of price categories, from high-end rockers to budget overdrive machines.

So, whether you’re looking for your first or 51st, these are sure to satisfy your rock cravings. Stick around after the chart, where we will attempt to define what makes a good rock guitar. We begin this chart with a legend in the world of rock guitar – actually in the world, period! While we could have selected any Les Paul, we have gone with the 2019 Standard as it offers the high-end design, build and tone we expect from an American-made Gibson, with a few surprises.

It’s hard to fault the design and playability – it rocks. With the classic LP shape, it’s made from solid mahogany with an AAA figured maple top, while the neck features a sleek asymmetrical profile. 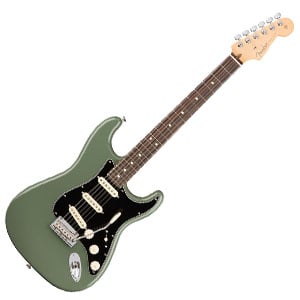 This list would not be complete without a Fender Strat. This iconic guitar has been played infinite times on the biggest stages by the biggest rock gods – Eric Johnson, John Frusciante, David Gilmour and Rory Gallagher, among thousands of others.

It’s capable of overdriving an amp beautifully, thanks to the trio of well-designed V-Mod single-coil pickups. Perfect heat for classic rock and blues rock in particular. Check out the full review of the American Professional Stratocaster for all the details. 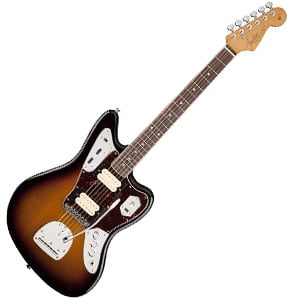 Kurt Cobain needs no introduction, and neither does his prized Jaguar. This is why Fender released this signature model – a tribute to the legendary Nirvana front man’s influence on the world of rock.

While retaining the classic style of the Jag, this model shows off some unique features in terms of style and hardware. It sports a comfortable alder body with a modern C-shaped maple neck, with the shorter scale length of just 24”.

It’s loaded with two DiMarzio humbuckers, with a DP100 Super Distortion at the bridge. These offer powerful punk, rock and grunge tones on demand. The full review of the Kurt Cobain Jaguar has more on this solid rock guitar. We’ve had some high-end models on this list, but the G5425 from the Electromatic collection is an affordable model that’s just perfect for all styles of rock. Most notably, it features the classic Gretsch retro look, with the distinctive Jet body shape.

This body is made from basswood and finished in a glitzy silver – very cool. As for hardware, it’s fitted with two standard humbuckers, designed to look like classic Filter’Trons. The sound quality on offer from such an affordable guitar is fantastic.

The buckers offer a solid platform for everything from rock ‘n roll right up to modern rock, with surprisingly high output leading to big gain. There’s more on this cool guitar in the Gretsch G5425 review. 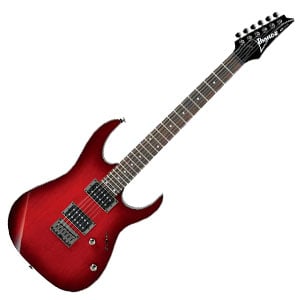 Ibanez RG421
While Ibanez is a name more associated with metal, they are the go-to brand for many rock enthusiasts – professional guitarists as much as complete beginners. The RG is one of their staple guitar lines.

The RG421 is one of the more affordable models in the RG collection, yet it shows off some key features that make it so suited for rock. There’s the sleek superstrat body made from basswood, which features the bolt-on Wizard III neck. This neck is one of the fastest out there – perfect for all styles of rock. There’s no point making a list about the best guitars for rock and not including an SG! Since their appearance as an alternative to the Les Paul in 1961, the SG shape has been a stalwart of rock.

This time we have sided with Gibson’s subsidiary Epiphone to deliver the goods with their version – the SG Special VE, which comes with a more affordable price tag. As we mention in the complete SG Special VE review, costs are kept down thanks to using things like a poplar body with a mahogany veneer.

Other highlights of this one include a choice of vintage finishes, two Epiphone-designed humbuckers, a ‘60s SlimTaper D-shaped neck, and a sturdy fixed bridge. 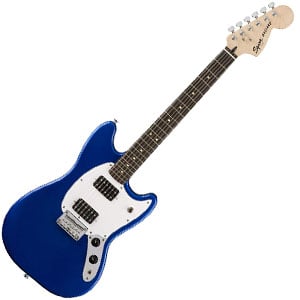 The Mustang HH from Squier’s respected Bullet Series proves a very popular model for rock guitarists in the budget market. Both beginners and experienced rockers can enjoy the style, comfort and tone on offer here.

With a compact 24” scale length, this Mustang shows off serious playability. Comfort is also high, with a lightweight basswood body and a relaxed offset shape, as we highlight in the full review of the Bullet Mustang HH.

It’s still a cheap guitar, so hardware is quite basic. Yet, the pair of humbuckers and simple controls lend themselves well to surf rock, indie and punk rock in particular. Well worth checking out, whatever your budget.

Why Does the Chart Jump from High-End to Entry-Level?

We have used our chart as a platform to display some of the most iconic and most often used rock guitars out there. We could have listed only premium American-made models, or we could have gone entirely for entry-level guitars. Instead we have mixed it up a bit.

This means you need to use some initiative. If you the high-end Gibson Les Paul appeals, but you can’t afford the $2,000 price tag, check out one of the many Epiphone versions, which will come in at around a few hundred bucks. If you adore the Squier version of a certain guitar, but you want something that will be suitable for stage and recording, just search for a Fender version of the same thing.

What Makes a Good Rock Guitar?

Good question. First, how are we defining rock? Like any music style, it’s not easy.

In a nutshell, we would say the term ‘rock’ incorporates everything from early rock ‘n roll (artists like The Beatles and Chuck Berry) right up to hard rock (think AC/DC, Bon Jovi, and Guns n’ Roses). Would would also incorporate all the offshoot genres, such as grunge, punk rock and the post-punk revival – everyone from Green Day and the Foo Fighters, to Oasis and Weezer. But this just scrapes the surface!

The only thing we aren’t classing as rock – for the purpose of this article anyway – is metal. We believe metal is its own genre these days. Therefore, if you are looking for a guitar with more of a metal edge, be sure to check out our article on the best guitars for metal.

With that said, what do we feel a good rock guitar should offer?

Speed: Much like a guitar made for metal, how fast a guitar feels is an important factor in rock music. While perhaps not as intense as metal, rock is a genre full of quick chord changes, fast riffs and blistering solos, so speed is still important. Therefore, a comfortable neck with a hand-friendly slim profile is ideal. A Les Paul, Stratocaster or anything from Ibanez usually ticks the boxes for comfort and speed.

Pickups: When it comes to pickups, humbuckers are desired. Of course, rock guitarists have made great use of Fender single-coils in countless tracks through the ages, yet when the gain and volume are really tuned up, it’s a humbucker you want fitted to that axe. Whether you go for active or passive is up to you, although – unlike metal music – passive pickups tend to be the style of choice in rock. The thick, warm and organic sounds that passive pickups can deliver are excellent for both rock rhythm and lead tones.

Hardware: Whether you are playing punk rock rhythm or classic rock lead, you want to ensure your tuning stability is solid. A fixed bridge (as you would see on a Les Paul or Telecaster) is usually the best style for ensuring reliability, although a true rocker may not want to give up their tremolo bridge and whammy bar (as you’d see on a Strat or superstrat). Keep an eye out for locking bridges and nuts, which allow you to enjoy divebombing a la Van Halen, but retain your tuning.

Ultimately, providing the instrument is comfortable to play and the pickups are able to cope with the level of gain you want, then it’s up to your individual style to determine what guitar you go for. You may want to sport a no-nonsense classic – like a Les Paul or Strat – on stage. Or you may like something a bit more edgy – something with an interesting shape, eye-catching color, or in-your-face graphics.

Finding the best rock guitar for you is 99% a personal choice. If you want to perform in an Iron Maiden tribute band with a vintage Tele, then that’s your choice. However, after reading this article, you will know that there are better options available to you.

What next? Read some reviews and watch some videos of the models we’ve mentioned, then go exploring – your perfect rock guitar is just on the horizon!