Last Updated: Apr-25-2019
We decided to revamp this article on the best metal guitars by adding a few new models. First, we removed the older Peavey ValveKing II, then inserted the intense Randall EOD88 Head, as well as the powerful Blackstar HT Stage 60 Mark II combo.

From neoclassical to industrial, death to thrash, djent to speed, the world of metal is loud, brash and utterly awesome. It’s a style that truly pushes guitarists, guitars and gear to the extreme.

But having an awesome high-end axe with powerful active humbuckers won’t cut it if your amp isn’t capable of delivering the insane overdrive and articulation that metal requires. Which is why a dedicated metalhead needs a dedicated metal amp.

Of course, you’ve come to the right place, as we have put together a short rundown of some excellent guitar amps that are ideal for hard rock and heavy metal. We’ve highlighted some true legends, as well as some awesome affordable amps worth considering.

Stick around after the chart where we take a closer look at what makes a good metal amp and what to look out for when shopping for one. 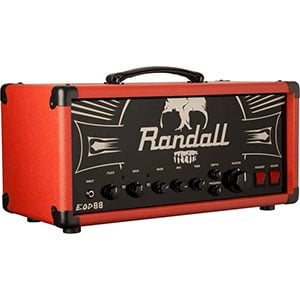 There is no mistaking what this tube amp is all about. Before you even switch it on you know it screams heavy metal.

The fact it was inspired by an Ozzy Osbourne quote lets you know instantly what direction Randall went with for the EOD88. It comes in a limited-edition red casing that just screams to be noticed – the skull motif helps!

With a built-in fuzz circuit and three stages of gain that are basically dirty, dirtier and filthy, this is a metal amp alright! Fuzz and gain are switchable via the included footswitch. It's a modern amp, but it's unapologetically authentic in its heavy metal roots. Find out more in our full Randall EOD88 review.

Blackstar is renowned in the metal community for its outstanding tube amps and modeling combos. The HT Stage 60 Mark II – part of their flagship HT Venue series – offers top-of-the-line tones and projection with incredible versatility.

While the clean tones here are great, hard rock and metal players will really appreciate the pair of overdrive channels. With four total voices (two on each channel), it’s easy to get just the right tone. From warmer, classic overdrive to all-out ripping shredder tones, the HT Stage 60 offers it all.

An included USB output rounds out the package, allowing you to plug directly into a computer for easy and painless recording. For a closer look at this amp, check out our full review. If there is one name that has made an impact on the world of high gain guitar sound, it is Eddie Van Halen. Therefore, when a guitar player of his caliber designs a perfect amp according to his needs, we listen.
EVH 5150III is an awesome little tube head with vast supplies of gain ready to be used. It is an all tube design that features three separate channels, and just an impressive tone. What really makes the EVH 5150III a really special treat is that classic EVH 'brown tone' that.

Gain management is easy, intuitive and really allows you to dial in the type of sound you're looking for. Overall, this amp is about as good as it gets. Peavey's 6505 easily the most popular choice for metal guitar players around the world. There's several reasons for that. The most obvious one is the copious amount of gain this thing can dish out, which attracts the extreme metal crowd.

Pretty much any humbucker you plug into this bad boy will scream with heat. The formula they have used has proven to be just the kind of thing necessary for a good metal sound.

Since it is an all tube amp, you can expect to distortion to be organic, full and highly flexible. Peavey's 6505 series of amplifiers are by far one of the best things you can get if metal is your main genre of music. That's a fact. If we were to go back to the early days of metal, we would see that a large number of guitar players used standard Marshall heads. Something like this Marshall DSL100H is a genuine, old school way to get a proper metal tone.

Especially considering that you get three dirty channels, including classic crunch. It is arguable that OD2, where most of the gain is available, is something that's going to be used the most in metal music.

Overall, without any additional effects, Marshall DSL100H can get you into quality trash or heavy metal territory without even breaking a sweat. Additionally, since it packs 100 Watts of pure heat, you are looking at a very capable gigging piece of gear. 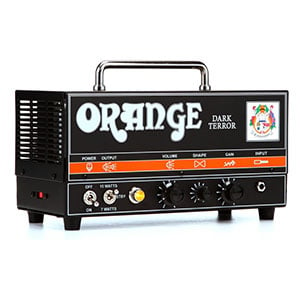 Despite being simple, small and portable, there is nothing lightweight about this all-tube amp head from Orange, which delivers ultra-high gain that’s perfect for pretty much any style of metal.

The Dark Terror – part of the brand’s famed Terror Series – is a low-wattage single-channel head, offering 15 watts (switchable to 7) of power driven by two EL84 power tubes, three 12AX7 preamp tubes and an 12AT7 tube driving the serial effects loop.

While the cleans aren’t as pristine as some may require, the gain is sensational and there’s enough power for any small to medium-sized gig, while it is wonderful in the studio. There’s more on this amp in the https://www.guitarfella.com/orange-dark-terror-review/full review of Orange’s Dark Terror. 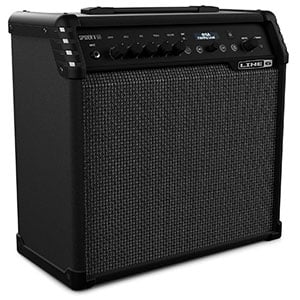 Line 6’s famous Spider series of amps has enjoyed a recent upgrade in both the visual and feature departments, making the affordable Spider V 60 one of the best amps on this list.

As we highlight in the full review, this amp sports an all-black design with sophisticated new matte black color-coded controls that all feel intuitive and robust. Under the hood you’ll find a single 10” speaker, offering 60 watts of power, making it a great stage partner.

But it’s the sheer amount of amp models and effects on offer that make this solid-state combo amp such a great buy, with huge versatility. The included drum loops, built in tuner and metronome don’t harm its value either!

What Makes a Great Amp for Metal?

Perhaps one of the most common questions people getting into metal tend to ask is whether there is such a thing as a guitar amp designed specifically for metal. And it’s a good question!

Technically any decent amp should be able to deliver the goods, but – as you will have seen on our chart above – there are some amps that excel at metal.

These amps share some traits. For example, the amount of gain on offer. Highly-saturated overdriven tones, chunky rhythms and searing hot leads define the metal genre, so a good metal amp will be able to offer the most aggressive, face-melting distortion you can imagine, while still remaining clear, punchy and articulate.

While you can play metal on some good all-rounders (that may also perform well for blues and jazz styles), these amps rarely offer the extreme metal sounds a dedicated metalhead would need.

Should You Go for a Tube or Solid-State Amp?

Of course, the age-old debate over tube amps and solid-state amps extends into the world of metal. While the difference between the two is far less noticeable in this genre, that doesn’t mean it’s non-existent.

The majority of amps in our chart are tube amplifiers, which suggest tubes deliver a pretty great metal tone. This is true as they deliver a rich and full overdrive that sounds warm and natural and is very responsive to your playing style, while still being able to go insanely heavy. If you have the money and experience, a tube amp is well worth exploring.

But there is no right answer – the choice will come down to you as the guitarist, based on your style, your budget and your preference.

Why Not Just Use Effects Pedals?

Guitarists will know that you can also use both multi-effects pedals and dedicated metal pedals to achieve some insane metal tones. In most instances you can combine a good amp and a decent pedal to achieve an awesome tone.

However, as good as some distortion pedals are, they still fall a little short of the tone delivered from a devoted metal tube amp that’s saturated with gain. For the best tone, use effects pedals to complement a good amp, not use instead of.

Playing Blues on a Metal Amp

Don’t judge a book by its cover – just because an amp boasts an epic overdrive channel doesn’t mean it can’t be used for anything other than metal. In fact, most of the models we have listed in our chart are perfectly suitable for a wide range of music, from blues to jazz (providing you turn the gain down first!).

One thing worth noting is that some of these metal-oriented tube amps may not offer crystal clear clean channels. After fiddling around with the volume and tone settings on both the amp and guitar, you can certainly find very acceptable cleans, but usually there will be some grit to the sound.

If you are keen to play country and jazz alongside metal – or just want pristine clean channels for certain parts of a song – a solid-state modelling amp may suit you better than some tube amps.

There we have it! Whether it’s Metallica, Meshuggah, Avenged Sevenfold, or Rammstein that floats your boat, the models we have highlighted above should at least give you some inspiration when shopping for a suitable metal amp.

Every guitarist’s taste is different, so get out there and find the tone that suits your playing style. Don’t just settle for the first amp that comes along. Your journey to finding the perfect metal tone might end up being a long one, but nothing beats the feeling when you do eventually find it.