How Does a Tremolo Pedal Work?

Tremolo effect and tremolo pedals have been around for a long while. This is one of the oldest guitar effects in use, and the first ones usually came built in an amp. Since guitar players back in the day had very limited options when it comes to changing their guitar tone in any way, tremolos became very popular in a short period of time. It didn’t take long before tremolo pedals became available, which pretty much offered the same exact experience only this time you could use it with any amp you wanted.

That being said, how does a tremolo work exactly? You will hear people say that it’s one of the most basic effects to build, but what does that mean when it comes to its principle of operation. Knowing how a tremolo pedal works can allow you to choose one that fits your setup better, thus giving you the performance you really need in your music. Today we are going to tackle this subject and talk about various ways some of the best tremolo pedals deliver their effect to the user.

Understanding The Difference Between Tremolo and Vibrato

The name tremolo in the title of this effect confuses a lot of guitar players. For most of them, a tremolo pedal is just an effect version of the tremolo bar on their guitar. However, this couldn’t be farther from the truth. When you operate a tremolo bar, that extra strain you put on the strings changes their pitch upwards.

Once you relax the strings past their nominal tension, the pitch sinks down. One thing remains the same, though. That is volume. Tremolo pedals on create their effect by affecting the volume of your signal, and not the pitch. The effect that replicates the use of a tremolo bar is called a Vibrato.

How Does a Tremolo Work 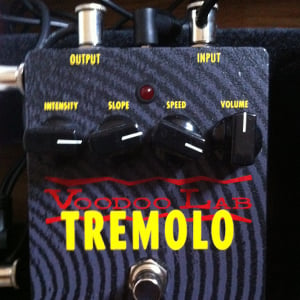 Once the effect is turned on, the pedal’s circuitry creates a wave carrier signal that rapidly changes the amplitude of your guitar’s raw signal. In other words, the volume will start from a default value, get lowered to a certain point, and brought back again. This type of oscillation forms a wave. Most basic pedals will use a standard sine wave, while some more advanced ones will let you choose between several waveforms. If you would like to know about all the different features you can find in modern tremolo pedals, check out our article that deals with that topic in depth ‘What Makes a Good Tremolo Pedal?’. There are several types of circuits being used today in order to cause a tremolo effect. The most common one relies on the Voltage Controlled Amplifier to alter the amplitude of the signal (the distance between the highest and lowest value in a wave) in order to recreate the tremolo effect. This type of circuit is pretty reliable and delivers consistent performance whenever you use it.

Next notable trem circuit is the one based around an LFO or Low-Frequency Oscillator that is often combined with a combination of high pass and low pass filters. The LFO changes the phase of the signal before it reaches the amp, thus creating the tremolo effect. There are several popular versions of an LFO based circuit. A lot of boutique pedals will use one that has a photocell component where the signal is routed through a bulb that turns on and off. The type of wave you get by using a bulb is closer to a square wave than a sine wave.

While tremolos definitely are among the most basic guitar effects you can have these days, the process of building a good one takes a lot of finesse, knowledge, and skill. The circuitry is well known by now, but that will only guarantee the core performance of a trem pedal. Any additional feature will require a redesigned circuitry which may, or may not be an easy thing to do.

There is a perfectly good reason why some of the best boutique tremolo pedals cost a fair amount of money. With that said, it all depends on how far you are willing to go, and how much of a complex tremolo effect you need. Most guitar players will be fine with even the basic versions, as they still give you the core performance which made this effect popular in the first place. If you are basing a lot of your music on this effect, you might want to invest in a more versatile model.