The year 1951 saw the birth of Joey Ramone and – most importantly for us guitarists – the now iconic Telecaster introduced to the world by Leo Fender!

It became the first successfully mass-produced solid body electric guitar, and has since been put to great use by legendary Tele players including ‘King of the Tele’ Roy Buchanan, and ‘Telemaster’ Danny Gatton.

However, none of these would have been as memorable without that classic sound provided by a good Tele pickup – bright and twangy, with lots of soul.

While Tele bridge pickups are often fantastic, Tele neck pickups – in particular cheap and stock versions – have the reputation of being the least loved guitar pickup of all time. More on this is in the guide, but it’s understandable why so many Tele players want to change their stock sets.

So, we’ve put together a short chart to highlight some of the best Telecaster pickup upgrades worth fitting to your Tele – some neck, some bridge, and some complete sets. Then stick around for a short guide on the basics of Telecaster pickups.

Fender’s Custom Shop Texas Special is a set that will turn any Tele into an absolute tone machine – and, even for the higher price tag, they show great value.

They are made with Alnico V magnets that are staggered for optimum tonal balance, fixed into a fiber bobbin, then wrapped with enamel-coated magnet wire. This all results in a set that offers the much-craved premium punchy Tele tone with a big output, which remains clear and warm.

The bridge pickup is given a copper-plated steel bottom plate, which boosts output, while the bassy neck pickup is shielded with a nickel-silver cover for additional clarity. This set isn’t worth your time if you’re looking to play heavy, although classic rock sounds great – as does blues, jazz and country. 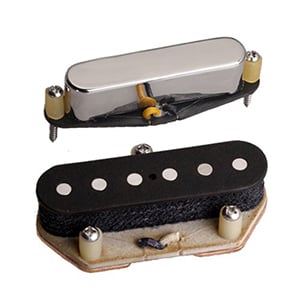 Tonerider may not have the big-name appeal of a DiMarzio or Seymour Duncan, but they sure do know how to make a quality Tele pickup. Their bestselling TRT2 Hot Classic set lives up to its name, and are capable of giving any Tele a tonal boost.

Both pickups are really smooth and well-balanced – no treble shrill here. The neck is bluesy and rich, while the bridge gives you the classic Tele twang with a bigger output and a fatter mid-range than anything you’d find in stock pickups. For such a reasonably-priced set, these Toneriders impress! 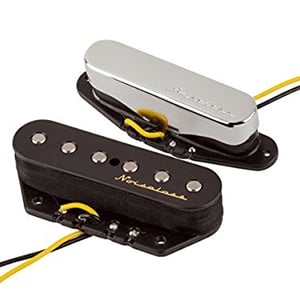 As all Tele players can admit, the major struggle when playing is overcoming hum and excess noise. So this stylish Vintage Noiseless set from Fender is a godsend. With classic ‘60s tone, featuring superb twang and bite, these single-coil pickups act more like humbuckers in their hum elimination – making them perfect for the gigging guitarists.

They are made with special stacked Alnico V magnets, which are wrapped with enamel-coated magnet wire. The neck pickup features a nickel-silver cover, which gives it extra clarity – none of that traditional muffled sound associated with the Tele neck pickup.

The bridge pickup gives you the classic Tele twangy tone. With the added quietness, this is a very versatile set – excellent for heavier styles. Whether you’re a fan of Jerry Donahue or just want a quality versatile bridge pickup for your Tele, Seymour Duncan’s APTL-3JD is worth a look. This signature single-coil was designed in collaboration with Tele virtuoso Jerry Donahue, who asked for a pickup that delivered the same tone as his beloved ’52 Telecaster, allowing him to replicate it on his touring guitars.

It’s very bright too, although rolling the tone off a little allows you to really let rip. Jerry, we salute you. 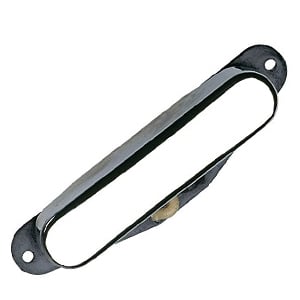 If twang is what you are looking for, then DiMarzio’s DP172 Twang Kings are one to add to your shortlist, offering true vintage twang in the neck position.

Available with both chrome or gold cover, this pickup features an Alnico V magnet, controlled-tension windings, and double wax-potting for squeal-free performances (although hum remains – it’s still a single-coil after all).

The pickup itself is hugely responsive to your attack, offering a great dynamic range – from a whisper to a scream with the flick of a pick. As for tone, with twang aplenty, it delivers a fat, bluesy sound with none of the muddiness you’d find in cheaper pickups. Great for traditional Tele tones, with a few Strat qualities mixed in.

What Makes a Telecaster Pickup?

There are two pickups on a standard Tele: the neck and bridge. Both are a little different from each other – both physically and tonally – although neither drift too far from a typical single-coil pickup in their construction (magnetic pole-pieces held by a bobbin and wrapped in wire).

The Tele bridge pickup is considerably larger than the neck pickup, with wider, deeper bobbins (and therefore coils), while it also traditionally sits on a distinctive metal baseplate, often made of brass or steel. The neck pickup features a smaller bobbin, along with a removable metal cover, usually made from chrome or nickel-silver.

Just like Stratocaster pickups, the pickup setup on a Telecaster is pretty familiar. Typically, they will feature two single-coil pickups, with a three-way selector switch – allowing you to play them individually or both together – as well as individual tone and volume control knobs.

The bridge pickup is fixed to the guitar quite closely to the bridge, and is slanted so that the pole-pieces for the treble strings are closer to the bridge than those for the bass. This is why – as we’ll discuss below – a Telecaster bridge pickup offers such a trebly tone.

Finally, note that some Tele’s will offer a humbucker (sometimes two) instead of single-coils, usually on Tele Deluxe or Custom model.

Telecaster single-coils give the guitar its trademark bright and twangy tone, although both pickups offer slightly different sounds.

The bridge single-coil provides the bright and trebly sound that could be described as the true Tele tone. It’s clear and twangy, and is higher wound meaning it’s a little hotter and louder than the neck.

The neck is generally smoother and more balanced in tone compared to the bridge, but it delivers less volume and can be described as a bit lifeless – while it can also come across as muffled due to the metal cover. This is one of the reasons Tele neck pickups are one of the least favored pickups – and why most guitarists want to change them!

We have already beat upon the neck pickup enough, although we’ll reiterate that they can come across a little quieter and less soulful than the bridge pickup.

Otherwise, Tele pickups in general suffer from the same problems as any single-coil – including Strat or P-90 pickups – and that is hum. This becomes more of an issue as you increase the volume and drive on your amp. They are therefore not ideal pickups for metal or heavy rock.

However, some Tele pickups (like Fender’s Vintage Noiseless Tele set in our chart) go a long way to remedying the problem of hum.

Telecaster single-coils can be some of the most temperamental, noisy and hated pickups around – but they can equally be delightfully twangy, bright and soulful, and can make any Tele a vintage masterpiece. You just need to find a good pair, which can turn a noisy old beat-up Tele into an absolute tone monster.

Make sure you read some full reviews of the pickups on your shortlist, then check out some videos of those pickups in action. You’ll eventually settle on something that you love. Good luck!