Last Updated: Apr-25-2019
After taking a good look at our chart on the best solid-state amps, we were satisfied with our existing choices. However, we decided to expand the article with a new budget addition – the impressive Fender Mustang I V2.

In a world dominated by tube elitism, solid-state amplifiers are once again finding their place. More and more solid-state models from a wide range of brands, including Marshall, Fender, Roland and Orange, are being produced and they’re proving a useful tool for guitarists of all styles.

Which is why we’ve compiled a chart highlighting the best solid-state amps on the market today, spanning several popular price ranges. After we’ve dived into some of the best amps, stick around for a look at solid-state units and how their image has changed over time. 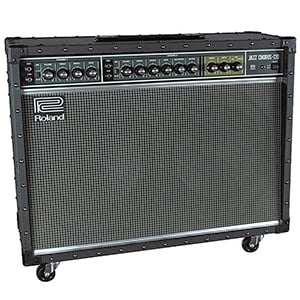 Roland's JC-120 Jazz Chorus amplifiers bring the essence of a very odd time in solid state amp history. What we have here is a rather vintage looking combo that looks like something straight out of '80s.

However, that's only a facade to a very capable hardware that can single handedly alter the perception of this category. With a mighty 120 Watts of power at your disposal, several built in effects and plenty of controls, this Roland combo is a perfect choice for both studio and stage use. Where most Orange amps pack a killer dirty channel and a mediocre cleans, Crush Pro CR120H is the other way around. Cleans on this head are out of this world.

In addition to 120 Watts of power and generous control interface, this amp just keeps on giving. Whether you need a capable workhorse on stage, or something that will give you the necessary clarity in the studio, you can't really go wrong with Crush Pro CR120H 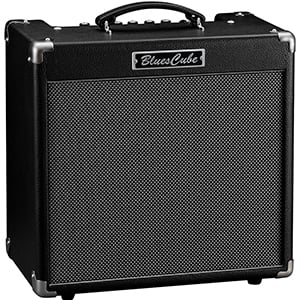 When it comes to basic solid state amplifiers, Roland is probably the best brand to turn to. Their Blues Cube Hot offers one of the most boiled down combos you can get. Blues Cube Hot is a classic amp with a single channel, plenty of standard controls and not much more.

It is basically a blank canvas that offers a solid base for tone building. You get 30 Watts of power with built in attenuation, making the Blues Cube Hot a great choice for practice use as well.

The tone that it delivers is amazing to say the least. The clean channel is reminiscent of Roland's legendary models from the past. As such, it commands respect and praise. 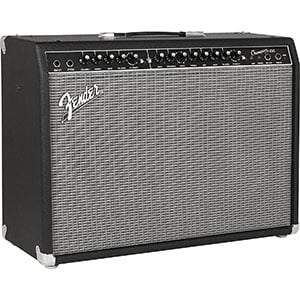 Aside from the sheer power and tone, one of the main draws to the Fender Champion 100 is the simplicity – it’s a no-nonsense solid-state combo amp that’s easy to get to grips with.

That’s not to say it isn’t flexible in its sound-shaping capabilities, as it features a wide range of amp voicings and effects – including chorus, delay, reverb and flanger – over two separate channels. Tonally, you can find everything from sparkly Fender cleans to a beefy distortion for heavy rock. 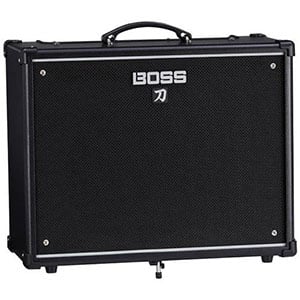 Featuring five finely-crafted amp channels, along with a mind-blowing range of legendary Boss effects, guitarists of all genres will be able to dial in tones that are sure to impress. Lush acoustic bliss to full-on metal onslaught can be yours, all in the same convenient 100-watt package.

The level of flexibility that the KTN-100 offers is simply amazing for an amp at this price point. You can get all of the juicy details by checking out our full KTN-100 review. Line 6 has made it to the top of solid state/modeling segment thanks to their no-nonsense approach to guitar amplification. Their Spider V 240HC is among the most capable heads of this type.

Not only is the tone great, but this thing offers some 240 Watts of power to its user. In other words, you can bring this bad boy to any stage in the world and be set. On top of that, Spider V 240HC also brings that Line 6 pricing, which makes the entire deal so much better.

If you were after a capable head that can be used both at home and for gigging, chances are you won't find a much better model than this one. 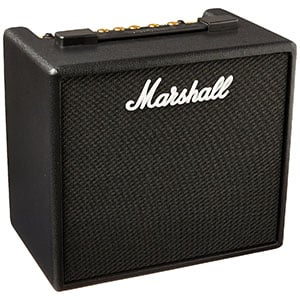 Marshall’s CODE 25W is one of the most versatile affordable solid-state amps on this list, with a whole world of tones, amp models and effects crammed into a relatively small package.

It’s very well-stocked, with 14 classic preamps, four power amps and eight speaker cab emulations, as well as 24 digital effects to give you huge flexibility both on stage and in the studio.

At 25 watts, it’s certainly not the most powerful amp on this list, but the tone and power still offer performing guitarists a solid partner for smaller stages. For under $200, it shows incredibly good value. Be sure to check out the complete Marshall Code 25W review for all the details. 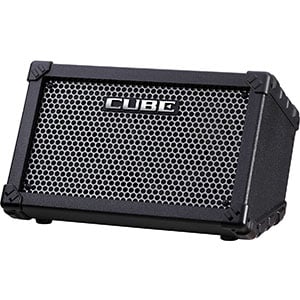 While the Cube Street from Roland is no match for some of the other solid-state amps on this list in terms of power or tone, this cool little amp is the perfect partner for guitarists on the move.

With two 6.5” speakers and 5 watts of power, this battery-powered combo amp shows off great style with a light and compact feel that makes it very useful for street performances (although the included adapter makes it a good home amp too). 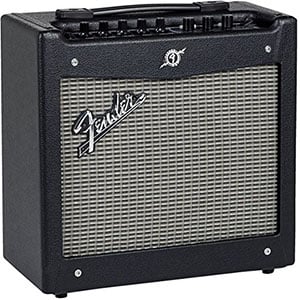 A newer addition to this list is the cool Mustang 1 V2 from Fender – one of our new favorite solid-state practice amps.

This compact unit is a prime example of everything that a good solid-state practice amp should be nowadays – affordable, powerful and very versatile. Featuring eight preset amp models and a good handful of onboard effects, your practice sessions can be much more inspiring and creative than you may think!

While it’s a practice amp at heart, the 20 watts of power gives this enough oomph to be heard in jamming sessions and can fill a large room very easily. Check out our full review of the Mustang 1 V2 to see everything that this amp has to offer.

What is a Solid-State Amp?

Back when electric guitars were first developed, the world was still living in the age of the vacuum tube, with electronics at that time using analog technology to operate. When it came to guitar amplification, it turns out that tube amplifiers were a godsend for tone. So much so that they have continued to stick around until today.

The main issue with tube amps was that they were not that efficient, because a big portion of the power fed into the amp was turned into heat. While others ploughed on with tube technology, some manufacturers began developing transistor (or ‘solid-state’) amplifiers thanks to the advent of the silicon chip.

Instead of using inefficient vacuum tubes to boost the signal, manufacturers started using silicon-based transistors. The immediate effect was an exponential spike in efficiency as heat was drastically reduced. Soon enough, guitar amps became cheaper to produce and guitarists rejoiced!

Despite the tone, consistency and flexibility on offer from solid-state amps (which we’ll discuss further below), many experienced guitarists still see tube amps as king. In some ways, they are justified in their thinking – but this should take nothing away from solid-state amps.

In the beginning, the reception for solid-state amplifiers was pretty hostile. The new technology still needed some ironing out, but eventually these amps became more refined and we ended up with big power and amazing tones. Yet there are still pockets of unwarranted prejudice against solid-state amps. This is a big shame and not something you should accept as the truth, without some research of your own. Test some out, watch some videos and make up your own mind.

The Benefits of Solid-State Amps

Let’s drive home the point that we just made by pointing out some of the obvious benefits for guitarists using solid-state amps:

Price
We mentioned tube models were stuck with an inherent inefficiency, although the bigger problem they suffer is the cost of manufacturing one, with both vacuum tubes and their circuitry pushing up the overall cost of an amp. Some of the best tube amps out there are hand-wired, which pushes an already high price tag even higher.

Solid-state models don’t have this problem. Of course, you can find very expensive solid-state amps, but the manufacturing process of one is more or less the same as that of any other piece of electronic equipment, with printed circuit boards and mass-produced chips. This means the price of producing a solid-state amp is much lower than that of a tube counterpart.

In practical terms, this means that guitar players have the opportunity to buy something that is powerful and efficient, at a fraction of the price a tube equivalent would cost.

Consistency
While you can certainly get amazing tone from tube amps, every vacuum tube has a well-defined power band and you must keep the tubes in their sweet spot to achieve the best tone.

This would be fine if most sweet spots weren’t in the 100-watt range. This means, in order to reach that sweet spot, you must be playing at volume levels that probably work well on a big stage but are uncomfortable in a smaller environment.

Solid-state amps don’t suffer from this issue, meaning you have access to a consistently great tone at any volume, whether playing on stage to thousands or to yourself in the living room – from the moment you turn it on to the moment it goes off.

These amps offer the addition of a sound processing unit, which is similar to what you would find in guitar effects processors. These units emulate the tone and response of classic tube amps, providing huge versatility without increasing the price too much.

Portability
It’s a small point, but solid-state amps tend to be much lighter than their tube counterparts, making them easier to transport to and from gigs. On that note, they are also less fragile than tube amps, with no glass tubes at risk of smashing should you accidentally knock or drop the amp.

What to Look for When Shopping for a Solid-State Amp

While it will depend on your budget and aspirations, there are several things you should look out for when buying a solid-state amp.

The most basic requirement most guitarists seek is a good clean channel. This is because it’s a fundamental part of guitar playing. Even those playing the heaviest metal will need to go clean at some point.

A high-quality clean channel will also allow added effects to perform at their best. This is crucial if you are using external distortion or modulation pedals. On that note, if you don’t have the space, money or time to shop for external pedals, modern solid-state amps often have effects built in, so you are good to go in most cases.

As for power and the style of the amp (i.e. either a combo or head), it will depend on what you are using the amp for. If you are planning a big gig, a head that allows you to hook up to a cabinet will be your best option for convenience and power. If you are just using the amp for playing at home, practice or a studio setting, a good combo amp may suit you better for convenience.

Solid-state amplifiers have come a long way since they were first developed nearly 40 years ago. While you may have had some preconceptions, we hope that our guide has shown you that solid-state models have a lot to offer, while giving you some inspiration ahead of your next purchase. Good luck with your hunt for the perfect solid-state amp!