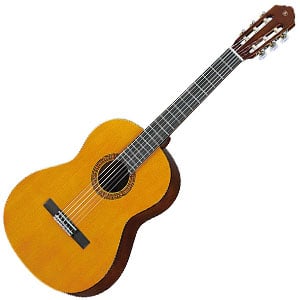 Japanese manufacturer Yamaha has been producing instruments for over a century – including some of the world’s best cheap guitars. The CGS103AII is based on their flagship entry-level model, the C40II. With a 3/4 size scale, the CGS103AII is optimized for smaller players and younger beginners trying out the instrument for the first time. Let’s check out why, like its bigger brother, this compact model proves one of the top budget classical guitars on the market! The CGS103AII features an all-laminate body design, with a spruce top and meranti back and sides. The neck is constructed from nato, which – like meranti – is another more affordable relative of mahogany. The spruce, a premier acoustic tonewood, is finished here to look like cedar (a more traditional choice for classical guitars).

Fan bracing supports the interior of the guitar, keeping everything lightweight yet allowing for optimal resonance and tone. The fretboard, like the C40’s, is made out of rosewood and finished in black to give the appearance of ebony.

This guitar’s biggest feature is the smaller 3/4 body size – with a 3.3” body depth and 23” scale length, the CGS103AII is ideally suited for young beginners and smaller players for whom a full-size axe might be unwieldy. On the flip side, this model might not be as comfortable for taller guitarists – the compact shape means less room to position your arms and hands when playing. The CGS103AII guitar sports a rosewood bridge, with a standard plastic nut and chrome pearloid tuners at the other end of the neck. The neck width is 1.9” at the nut – a tad smaller than many other classical models, and the perfect width for smaller fingers to easily manage.

The action is set low across the board, and intonation stays stable out of the box up the neck. While there are no electronics and no flashy inlays or rosette, everything here is solid quality, especially for this guitar’s bargain-basement price.

While the CGS103AII may be a mini version of the C40, there’s nothing tiny about this model’s sound. The range is broad and sweet, with clear articulation and warm tones across both treble and bass.

However, the guitar projects noticeably less than a full-size classical model. Treble notes lack some crispness (even by nylon-string standards), and the lower register can sound fairly muted with softer playing.

Like classical guitars in general, the CGS103AII responds well to fingerpicking and hybrid picking – but unlike other similar models, this axe almost sounds better with hard fingernail picking and pick strumming. The sharper tone tightens up the range without losing that trademark classical warmth. Overall, The CGS103AII is missing a noticeable bit of sonic depth and punch when compared to its bigger brother, the C40II, but it still offers great sound for the price and for the size.

It’s easy for smaller players to quickly grow frustrated with awkward full-size guitars. Difficulties with fretting and maneuvering the larger body can dissuade beginners from progressing on the instrument. The Yamaha CGS103AII solves their problems perfectly. With its durable construction and great tones, it’s not hard to see why this guitar is such a favorite among entry-level reduced-scale models. Ultimately, it falls slightly short when competing with the C40II, but it holds its own as a high-quality 3/4-size perfect for beginners and younger and smaller players.

For more info about the Yamaha CGS103AII, click here.
For more of the best cheap classical guitars, click here.