Yamaha C40II Review – An Upgraded Spin on a Budget Favorite 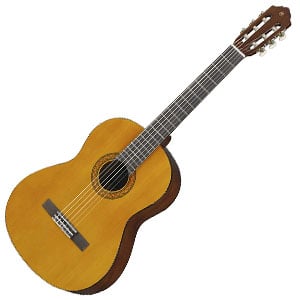 Yamaha is one of the world’s most famous instrument manufacturers, and for good reason – the Japanese company has been producing quality guitars, pianos, synths and a host of other instruments for over 100 years. Yamaha’s beginner guitars are particularly renowned for their combination of tone and craftsmanship at entry-level prices. The C40II – their flagship beginner classical guitar – is no exception. Let’s take a look at what makes this guitar one of the best budget nylon-stringed models around. The C40II’s body is made entirely of laminate wood, comprising a spruce top with the back and sides constructed from meranti (a plywood in the mahogany family). The spruce top is toned to look like cedar (a more traditional tonewood for classical guitars), and the body features black paint accents around the edges to mimic binding found on more expensive guitars.

The neck is made of nato, a wood widely used in budget guitars for its similar tonal properties to mahogany. The fretboard is made of rosewood, and finished with a black stain to appear more like ebony. While it plays well, some guitarists have complained that the finish smudges their fingers after some playing.

Playability is great out of the box, with the action set low and intonation consistent across the neck. The 22.8” scale, shorter than many steel-string and electric guitars, is perfectly tailored for smaller players or younger beginners looking for a comfortably sized axe. This guitar features a rosewood bridge, with a plastic nut and chrome pearloid tuners at the other end of the neck. There’s a single dot marker on the side of the neck at the seventh fret, though there are no fretboard inlays to help you keep track of your positioning.

Like most classical models, the C40II has a total of 18 frets. The fret edges are sanded down well, meaning you won’t poke yourself when playing like you can on many other low-end guitars. Finally, the neck width is 2.065” at the nut; while it’s a tad wider than some other classical models the extra space is great for beginners and not hard to adjust to.

It’s a well-known guitar ‘rule’ that laminate wood guitars sound poor in comparison to more expensive solid wood models. The C40II is one massive exception. This guitar’s smooth, glassy tones can easily compete with models over twice its price. It has a full, balanced range with plenty of definition behind each note.

Neither trebles nor bass dominate the sound, making this guitar incredibly easy on the ears. The high notes won’t sound as crisp as a steel-string, and this model lacks a bit of the sonic depth you’ll find in more expensive classical guitars, but for the C40II’s bargain price, the sound quality here is almost unbelievable.

Rather than spend their money on flash and style, Yamaha made the C40II the premier budget classical guitar. It’s perfect for almost any player, from beginners just picking up the instrument and looking for an easy and cheap model to learn on, to more advanced guitarists who want an affordable classical model to try out or take on the road. It may be a bit rough around the edges, but this guitar’s sound is unbeatable for the price range.

For more info about the Yamaha C40II, click here.
For more of the best cheap classical guitars, click here.