Ever since guitars first became amplified, one problem became apparent. In order to plug the guitar into an amp, a cable had to be used. this is still the preferred way of doing things today. In the grand scheme of things, not a lot of performing guitar players have an issue with guitar cables.

Most of the stages are small enough so that a medium length cable is all you really need. However, when you start to scale things up, you run into certain issues. A concert of a big name band is much more than just the music they play.

There’s a lot of moving around, going from one end of the stage to another, and so on. Using cables in this scenario can be very risky. They can end up tangled, or someone can accidentally unplug an instrument by pulling the cable out as they walk by. This is just one part of the problem. For this reason, a new solution had to be made. Something that would allow performers to move around freely without having to worry about their connection to the amp. Enter wireless guitar systems.

Going from cable to wireless is a trend that has propagated in all areas of our lives. The most obvious example of this technology are phones, but that is just the tip of an iceberg. Before long, people realized that guitar players and other musicians could also benefit greatly from using wireless technology instead of cables. Today, you will see them employed in various genres of music, and a whole bunch of different areas of show business. 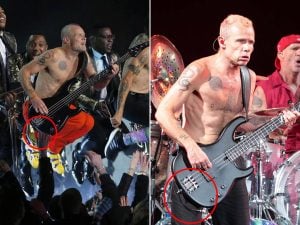 The first obvious benefit of using a wireless guitar system is the freedom of movement. These devices have a certain range, and as long as you don’t go outside this limit, you can pretty much do whatever you like and still have the signal reach the amp. On a similar note, there is a serious risk of injury if you trip over a guitar cable.

Most guitar players wrap their cable around their guitar belt. This creates more than enough resistance to keep the cable plugged in even if you pull on it hard. Depending on which portion of the cable you come in contact with when you trip, there is a real chance that you will fall over rather than unplug the cable at the amp side of things.

With that said, let’s talk about benefits of using guitar wireless systems when it comes to dialing in the sound of the whole band. Given enough range, you are able to get on stage and adjust the mix to a point that you think is suitable for the venue. What you can then do is go down to the audience pit, and have a listen from there. All while being able to play your instrument from that far away. This gives you so much more ability to iron out the tone than you otherwise have when using a cable. Some people go wireless based on this reason alone. The quality and level of improvement we’ve seen in guitar wireless systems in past several years will soon make them a valid investment. If you would like to know more about how these systems work, check out our article here ‘How Does a Wireless Guitar System Work’. Although wireless systems are not yet on the same price level as cables, nor will they reach that level anytime soon, they are getting cheaper every year.

One more thing that is worth mentioning is the risk of getting shocked on stage. Not a lot of people think about this since these accidents occur rarely, but it is still a very real threat. Grounding a stage is the job of the venue or the people who are renting that stage.

The technician responsible for this has to do a flawless job in order to ensure that no instrument or microphone is left ungrounded. If it starts raining during a performance, your gear gets wet, this risk becomes exponentially bigger. Using a guitar wireless system eliminates any chance of electric shock during a performance.

A lot of guitar players haven’t even thought about going wireless. In their mind, this is an investment that has no real benefits. All of that depends on how often you perform, and how much you value freed of movement and the rest of the benefits we mentioned in this article. The price of this tech is still up there, and honestly buying the affordable models is not really something you want to do.

With that said, wireless guitar systems definitely offer the level of comfort that is just not available when using regular guitar cables. Guitarists who perform often will appreciate this more than anyone else. If you belong to this category, we strongly suggest you look into wireless guitar technology in detail. It might solve a big portion of your problems.

And that wraps it up, feel free to proceed to our list of Best Guitar Wireless Systems on the market today.