When Wampler pushed out their Velvet Fuzz back in 2013, the community was divided. As time went by, people began to recognize the quality this thing had to offer, which isn’t immediately apparent. It’s not as ‘in your face’ as some of the more popular fuzz pedals on the market, but it has this layered nature that we have to appreciate.

Plugging it in raw probably won’t blow you away, nor will it make you think you’re working with one of the best fuzz pedals around. However, what the Velvet Fuzz V2 does best is to work with other effects in the signal chain. From the moment you pull the Velvet Fuzz V2 out of the box, it just lets you know you’re looking at a high-quality boutique pedal. The enclosure is a sturdy piece that is covered with a pretty nice graphic design reminiscent of the ’80s.

On the inside, you can see a pretty unique circuit that has been hand wired and completed using some of the best components available. This pedal comes with a genuine true bypass, which is a feature you hardly see anymore. 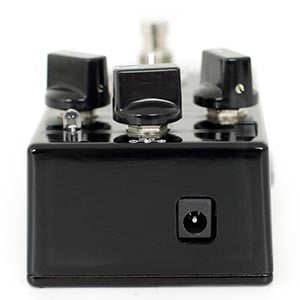 The set of controls you get on the Wampler Velvet Fuzz V2 Fuzz is a bit different compared to your standard fuzz layout. There are three knobs and one switch at your disposal. starting left to right, we run into the volume knob. Pretty self-explanatory, the only thing we would like to add is that there is no lack of headroom here. Next is your fuzz knob. Again, straight forward stuff.

Turn Fuzz clockwise and you get more fuzz in your signal, roll it back down and the fuzz is barely there. Brightness regulates your trebles, opening them up or cutting them down. The Big/Tight switch is an interesting feature. When in Big mode, you get a darker vintage fuzz, while the Tight mode gives you something closer to a distortion effect.

Like we have mentioned earlier, this is the type of fuzz pedal that doesn’t jump at you as soon as you turn it on. It has plenty of range, but the best thing about it is how it behaves when connected to a more complex signal chain. It’s tone color and range simply make it adequate for those who like to really layer their effects. With that said, on its own Velvet Fuzz V2 brings a pretty standard fuzz experience.

Even though it sports a rather unique circuitry, a lot of users would have no problem saying that this fuzz box is standard in its core. It’s a pretty good option for those who want a boutique grade fuzz that isn’t trying to be different.

Reliable operation combined with a proven tone and great compatibility is what you can expect to get from the Wampler Velvet Fuzz V2 Fuzz. For some, this type of character is underwhelming, but others definitely appreciate what Velvet Fuzz V2 has to offer.