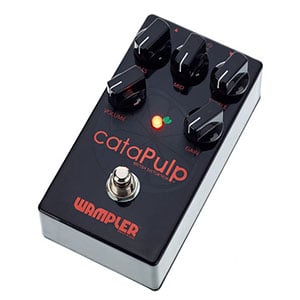 Run by founder and owner Brian Wampler, Wampler Pedals have been manufacturing inventive, original pedal designs for over a decade. The Indiana brand’s amp emulation pedals are particularly popular for their ability to bring classic full-size amplifier tones into a much smaller and more affordable package.

Their CataPulp V2 is a new and improved version of their mainstay CataPulp British Distortion. Let’s take a closer look at why this awesome distortion pedal is so highly rated. 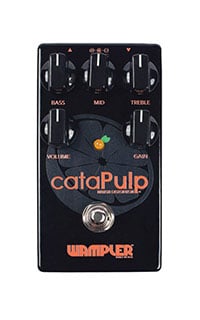 The CataPulp V2 emulates Orange 50-watt amps for a pure, richly-saturated British distortion with oodles of body and sustain. While it’s intentionally not an exact copy, it nails the trademark sound and style, while adding a few other helpful features.

Unlike many other pedals, this distortion is designed to clean up with the guitar volume lowered – the CataPulp features one of the more dynamic and broad response ranges on the pedal market today.

This stompbox also boasts active EQ controls. In contrast with passive controls, which simply attenuate certain frequencies when turned down, active equalization bands add extra frequencies to your tone when cranked for a fuller overall sound. The CataPulp will cut 15 decibels when turned all the way down, and add 15 when dimed. 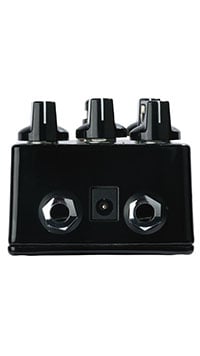 A straightforward five-knob setup guides the CataPulp. The three EQ bands form the top row, with controls for bass, treble, and mids. The default gain tone here is slightly heavier on the bass and through the mids, so many players might like to emphasize the treble a tad for some extra British chime, or scoop the mids out for a more modern, gritty sound.

Under this row lie the level and gain settings. The level controls the distortion’s total output – the unity is dependent on the gain setting, meaning players may need to add a hit of volume at lower gain settings and vice versa with the distortion cranked. The gain knob, obviously, controls the amount of distortion added to your signal. Like an amp, it’s designed to preserve your guitar’s voice and break up naturally – crunch and grit turn up around 12 o’clock, while the pedal reaches peak saturation in the 3 o’clock range.

The CataPulp’s gain-loaded circuit provides a great emulation of classic British crunch and distortion. Like an actual amp, the pedal cleans up when the volume is lowered from the guitar – a neat trick that makes it more flexible for a variety of sounds from early breakup to maxed-out drive.

At its best, with the gain cranked, the CataPulp saturates beautifully and packs more than enough punch for heavy metal and hard rock. The active EQ knobs also provide incredible room for customization – the 30-decibel range between the minimum and maximum settings on each dial makes it easy to scoop or emphasize mids, as well as find thick, bassy tones and chiming, ringing highs.

Unlike many amps, where the EQ and gain settings are linked together, the CataPulp is responsive enough that you can create clearer, treble-focused sounds even at high distortion levels.

The Wampler CataPulp V2 is a top-notch emulation of vintage British distortion, but this pedal also offers so much more. Its rare dynamic response and helpful active EQ bands are sure to make this a favorite among players across different genres. Any player looking for a creamy saturated tube distortion with loads of character will adore this one.