Traditionally, bigger has meant better in the world of amps. But while nearly every bassist may love playing in front of a massive stack, they are quite impractical for daily use and most gigs. That’s where the new ELF 200 comes in. Offered by Trace Elliot – the classic British bass amp manufacturer known for their bright, punchy ‘80s tones – this minuscule head packs plenty of power into its undersized package. Let’s check out why it’s one of the best bass amps available. 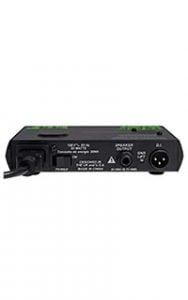 Obviously, the main selling point of the ELF 200 is its insane size and weight. Weighing in at just over 1.5lbs and measuring a mere 6.75” x 4.10” x 1.35”, this stylish little unit can easily fit in gig bags, backpacks, and even your back pocket if needed!

Yet with 200 watts of output through 4 ohms and 130 watts through 8 ohms, it has more than enough power to handle jam sessions, smaller gigs and even club-size outings. The included post-EQ XLR DI output means the ELF can also work in even larger scenarios with the help of a PA.

Because this is marketed as a practice and travel amp, it also includes a 1/4” headphone output – it’s frustrating that Trace Elliot chose not to include a more standard 3.5mm phone-style jack, but an adapter is an inexpensive workaround. In keeping with its small size, the ELF 200 offers a simple control layout. The five knobs control volume and gain, along with a three-band EQ. Though it is a pretty basic layout, it’s effective.

The EQ knobs are hugely responsive, allowing you to fine-tune your sound based on your desired tone. Thankfully, Trace Elliot chose full-size knurled knobs rather than mini ones. Though the amp may be small, it makes it easy to control your output without having to wrestle miniscule knobs.

The ELF 200 offers a naturally thick tone with heavy emphasis throughout the midrange and lower trebles. With everything set up the middle, it offers great punch – perfect for more prominent bass styles like rock, slap bass, and funk.

Scooping out the mids offers a darker, more laid-back tone without losing the bright fundamental character. However, this won’t get exceptionally dark and boomy – players looking to avoid Rickenbacker-style bright tones might not love the ELF.

There’s a good amount of headroom, though there’s audible compression on slaps and pops and at loud volumes the tones aren’t perfectly pristine. However, there’s not a ton of gain to speak of either – players looking for any serious amount of overdrive would be better served using a pedal.

It definitely gets loud enough to handle jams and smaller gig settings, though supported by a PA through the DI it could be used for even bigger venues without a problem.

The ELF 200 offers vintage, bright Trace Elliot tones at a miniscule size and price. While it’s not the most powerful unit, and its distinctive character won’t appeal to every bassist, it makes an exceptional amp for use at home and at smaller gigs, as well as the perfect backup amp to take on the go. At just 1.6lbs (no, that’s not a typo!), bassists looking for a fun, lively amp for practice, gigs, and on-the-go playing should give this a look.