Steinberg’s Cubase is one of the oldest and most used DAWs out there. It is also among the best software for music production you can find right now. The latest version, Cubase Pro 9, offers plenty of new features and improvements. Lets see what Steinberg has in store for us. When you first fire this bad boy up, you will notice just how nostalgic it looks. Even though this is quite normal for Cubase, seeing it in such a minimalist form brings back memories! However, this is only one subtle change to the user interface. Steinberg has kept the main workspace the same as before, but they have added a new Lower Zone section at the bottom of the UI.

We can only speculate that this was done to make it easier for users to navigate the interface on a single display. Cubase Pro 9 is packed with professional-grade goodies, all of which are accessible through the trusty familiar navigation system. Overall, the aesthetics of Cubase Pro 9 bring forth a cleaner interface, which in turn does a lot towards a smoother workflow. This is about as much as we could have hoped for. 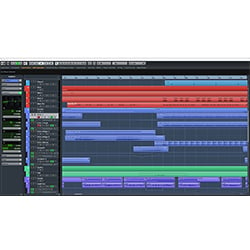 Whenever you install a new version of Cubase Pro, you know you will end up with an abundance of features. After all, this DAW is known as one of the most feature-rich on the market. Version 9 brings back all the usual suspects, although a lot of them have received a facelift. The MixConsole offers you a professional mixing desk experience, while this version arrives with a suite of over 90 high-end audio and MIDI VST effect processors.

One of the most notable new features is smart plugin integration. When you start up Cubase Pro 9, it will scan for all VSTs and actually check their health. Those that are unstable or outdated will be automatically removed from the access list. This way you are left with a much cleaner and more functional VST library.

You also have the new Sampler Track that makes working with various samples an easy experience. Essentially, what Steinberg has done is listen to the community feedback and made a good product even better.

Performance-wise, things are pretty much the same as before – Cubase Pro 9 runs smoothly and is fairly stable. If you have used this software in the past, you won’t have issues adapting to the new version. If you are just getting into Cubase, the learning curve will be pretty significant, yet Steinberg has done a decent job at making the entire DAW quite intuitive for anyone with a little experience. In general, they have ironed out some quirks that plagued previous versions. A few still remain, but it offers so much that you can forgive its smaller foibles.

Cubase Pro 9 from Steinberg brings you exactly what you would expect. More of the same with some significant upgrades in the right places. For such a massive DAW, Cubase Pro 9 works very well. If you’re looking for something that does it all – composing, recording, editing and mixing – this is a very smart choice.