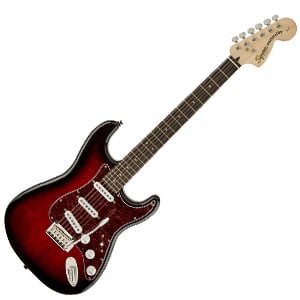 Most guitarists wouldn’t say no to a genuine Fender Stratocaster, although not every guitarist can afford one. Naturally the sensible compromise is a Squier Strat, of which there are many to choose from. Added to this ever-growing collection, the Standard Stratocaster proves a very popular model when it comes to electric guitars under $300. Let’s take a look and see why. 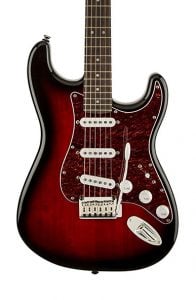 Whether this is your first or twenty-first Strat, you won’t be disappointed with the design of the Standard. Modeled on the Fender American Series Strat, it offers everything a good Strat should, such as the large ‘60s style headstock and the iconic double-cutaway body design. This body is made from solid agathis/basswood and comes finished in a few cool color choices – the Candy Apple Red and Antique Burst both highlights.

The neck is also your standard Strat, with a bolt-on maple construction, modern C shape and a slick satin finish. This houses a maple fretboard and 22 medium jumbo frets, while the rear features the cool ‘skunk stripe’, which is a minor detail missing from the lower priced Affinity Strats.

Ultimately, the Standard Strat won’t win any awards for originality, but it follows the tried-and-tested design to deliver a lightweight and fast-playing experience – one that looks pretty cool while doing it. 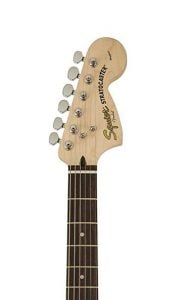 The Standard lives up to its name in the hardware department, providing you with the standard components you’d expect from a decent budget Strat. There are three pickups, all Standard alnico single-coils placed at the traditional neck, middle and bridge positions. These are controlled by a master volume and a tone control for both the neck and middle pickup. No fuss.

The bridge won’t surprise you either – a straightforward stainless-steel six-saddle affair with an accompanying whammy bar. The sealed tuners hold the tuning well, although you won’t want to be divebombing on this guitar.

The Standard ticks all the boxes in the tone department too. Sure, it’s lacks in comparison to a higher-end Fender model, but all the right elements are there. The clean tones are clear and bright, as a good Strat should be, while it heats up nicely when overdrive is added. It works well for rhythm playing, but is most comfortable in the hands of a lead guitarist, whether you are playing blues, country, or rock ‘n roll licks (it’s not hot enough for modern rock and metal, as you may expect).

Ultimately, the Standard Stratocaster is an excellent purchase for beginners and intermediate players, while advanced guitarists can’t go far wrong if looking for a solid Strat to upgrade. It plays very smoothly and, with a few additional design tweaks, it feels like a step up from the slightly cheaper Affinity Strats from Squier.