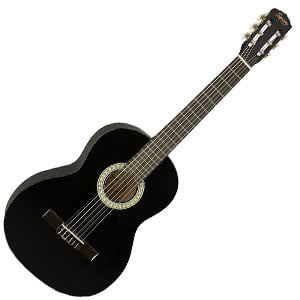 The well-known Fender subsidiary Squier have carved a big name for themselves in the budget areas of all guitar markets – electric, bass, acoustic and classical. And it’s this final category we’re interested in today, as we look at the wallet-friendly Squier SA-150N, which proves a great addition to our chart on the best budget classical models. 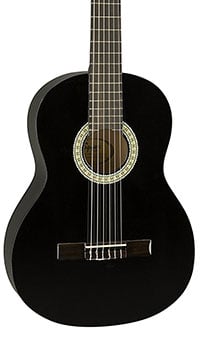 The SA-150N has plenty going for it in the looks department. It features a full-size classical body made entirely out of laminated wood, sporting a traditional mahogany laminate on the back and sides, with the lesser known lindenwood used on the top. On the natural version, the grain of this spruce-like wood is nicely displayed, although you can also find this model in a deep glossy black paintjob, which adds a touch of unique elegance – especially when paired with the attractive soundhole rosette.

The neck is made of mahogany and feels slim, which is equally great for beginners as it is more advanced players, while the spacious fretboard is stained maple, offering 18 frets in total. The only complaint we had was that the guitar had a bit of an odd odor, smelling a little chemically due to the paintwork. However, this passes after a bit of time and isn’t a deal-breaker. 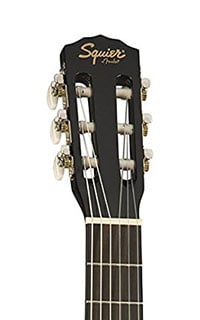 As you may expect from a classical guitar that comes in at under 100 bucks, the hardware on the SA-150N is nothing special. There’s a rosewood bridge, a plastic nut, and a set of open-geared tuners on the slotted headstock, all of which do the job asked of them. The tuners were easy to use, but the guitar slips out of tune a little, especially between sessions. It’s nothing too drastic, and probably no worse than others in a similar budget price range.

In terms of tonal quality and warmth, it struggles to compete with something in the higher price ranges, however the SA-150N still offers a very acceptable sound – it’s clear and mellow, with good projection. Perhaps a more experienced player would find it a little flat, but it delivers exactly what a beginner needs in terms of tone and volume.

As budget classical guitars go there are better models out there – but there are also many worse! But with the sleek black paintwork and gold Squier logo, the SA-150N offers plenty in the style department, and proves a nice alternative to the traditional natural wooden finishes that flood the budget market. For a beginner, or someone looking for a decent classical guitar that they don’t have to worry about, the sub-$100 SA-150N proves a great deal.