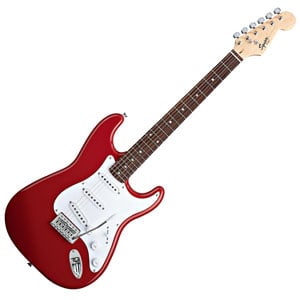 Squier is one of the first names that come to mind when discussing entry level guitars. Their Bullet Stratocaster has been among the most popular models you can get under $200 for a long time now, and for a good reason. This guitar came to existence when Fender realized their Stratocaster needs to be available to the budget user in some shape or form. Squier went on to produce the Bullet Strat, which later grew to be the quintessential beginner guitar. The body shares the same shape as the original Stratocaster, with the main difference being the choice of tonewood.

Instead of Alder, Squier builds these guitars out of basswood. The neck is a relatively standard C shape design that was copied down from Fender’s existing models. It’s far from a refined guitar, however fit and finish you get with the Bullet Strat meet all the reasonable requirements.

Offering an affordable guitar with a synced tremolo bridge seemed like a really bad idea. After all, these bridges are fairly complex as they are, let alone when you try to build them on the cheap. However, the end result was pretty surprising. Sure, it’s a sensitive Trem bridge, but it works. At the end of the day, that is all that matters.

Tuners Squier chose for this model come in form of a die-cast set which was inspired by Fender’s F tuners. They are crude and might put you through a few paces before you find that tuning, but they hold relatively well. All of the hardware comes in chrome and definitely looks the part. Considering the price of this guitar and what it was designed for, its hardware performs great.

Electronics, or rather the pickups Squier supplies with these guitars, are the source of the main line of criticism against this guitar. Single coils are sensitive by nature. That pickup buzz they inherently produce has bugged generations of guitar players. A very cheap set of singles can only be worse.

Squier Bullet Strat comes packing a set of pups which are somewhat limited by this phenomenon. It’s not a deal breaker, but its present. Pickups are wired to the standard control configuration. We are talking two Tone knobs, one Volume knob, and that five-position pickup select switch. Pots are decent, but nothing to write home about. Overall, the guitar works well considering its nature.

For a guitar that has been around for a while, Squier Bullet has been categorized in many ways, including its tone quality. For the most part, the guitar works great. It’s not the cleanest tone in the world, nor does it have the most range, but it works. In its price range, this Squier offers one of the most well-rounded sonic experiences you can find.

Squier Bullet Stratocaster was built with one purpose in mind. It was supposed to be the ultimate beginner guitar. Seeing what kind of impact it has now, it’s fair to say that Squier succeeded.

For more info about the Squier Bullet Strat, click here.