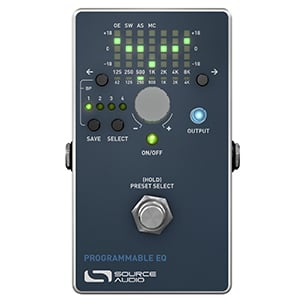 Most of the best EQ pedals you can find today are relying on one of the two most popular designs. They are either going to be a graphic EQ or a parametric one. The former is usually delivered in its conservative form, with mechanical sliders.

However, Source Audio decided they won’t follow this familiar route, but rather bring in some innovation to the already standardized design. What they have created in the process is by far one of the most notable guitar effects pedals in general. Today we are going to introduce you to the almighty SA170 Programmable EQ. The first thing that jumps at you when you look at the Source Audio SA170 Programmable EQ is the fact that it’s a graphic EQ with no sliders to be found. Instead, you have a LED strip for each of the seven bands available.

At first, the whole layout of controls, which are plentiful, and the way this pedal works might come across as redundantly complex, but the once you start playing with it, you will realize just how practical this configuration is. Once you add the fact that you can program different EQ presets, and then shuffle through them automatically, SA170 becomes a whole different beast. Unlike most graphic EQ pedals. Source Audio SA170 Programmable EQ comes with a set of controls that are anything but standard. In order to actually adjust different frequency bands, you have to use the select buttons to choose the band you want, and then the main knob to adjust the levels. On the left-hand side, you will find four buttons for each of your presets. On top of that, you can use your footswitch to shuffle through said presets by holding it a bit longer.

When it comes strictly EQ side of the business, Source Audio SA170 Programmable EQ is holding out pretty well. The bands are well defined, and the pedal is pretty transparent overall. Having the ability to save different presets is a mighty feature if you need to change your tone often during a performance.

Now, that feature which automatically goes from first to last preset and backward is especially interesting. To put it bluntly, it creates a sort of tremolo effect. The pedal figures out what the highest and lowest presets are, and cycles through them in order. On top of that, you can adjust the speed just like on a tremolo pedal.

At the end of the day, Source Audio SA170 Programmable EQ is one unusual, but rather capable effects pedal that can benefit anyone who is open minded. Extra features it brings to the table make it unique in its own way, and are actually useful once you figure out how they work.

In addition to all of that, SA170 is priced very reasonably, which makes it a pretty tempting offer all things considered. If you are looking for something that is a bit different, and don’t mind exploring new ways to shape your tone, this pedal is a model you should check out.