What’s in the mailbag today? Nope, that question won’t do (I don’t know anything about the socio-political context of freeze dried ice cream, but yuck). This question is easy, bears (your welcome Greg from Witchita, Kansas). Wait a minute, this one is interesting- what are some chords that sound sad on the guitar? There are some easy answers, and who knows what else we will learn.

Dissonance might be the reason we interpret things as sounding sad. Is does create a tension, but not always landing in the gloomy camp. I find sus2 chords to sound on the forlorn side while sus4 chords are more triumphant sounding. Both create dissonance, but one creates it with the root while the other reacts with the fifth of the chord. 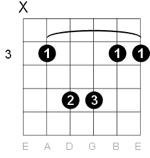 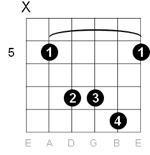 Cultural influences have quite an effect on how you interpret sound. Being from a Western culture that has consistently told me (through the music I listen to) that minor is sad while major is happy. If every song I ever heard that had a sad context was always in a major key, then my feeling on this might be different.

Traditionally, turning anything into a minor key is automatically making it sad. Play a simple progression in a major key, like: E-B-A (don’t play any power chords you need the major 3rd, especially in the E and A chords). Now switch it to a minor key (a harmonic minor key, if we’re being totally honest), which is: Em-B-Am. That once happy sounding progression has turned sad with the addition of some minor chords.

You can try this with any chord. Play the major, then play the minor. It should get a bit more sorrowful for every minor that you play. Some may sound more pronounced than others. I think an F#m doesn’t sound as sad a Dm, but that just might be only me.

A minor 7th is sort of an easy way to get to sad, with the minor already built in. But, to me a major 7th has a bit of angst along with the sadness. My favorite version being this:

Just like the sus2, the major 7 is reacting with the root. The minor 7 chords are not only sad by having the minor, but also have that pesky 7 stepping on the root as well. It might be the saddest chord ever. 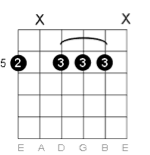 Sad is also dark. Dark is usually low. To make a sad chord you need to keep your voicings on the low end of the fingerboard. An Em7 played at the 12th fret is not going to have the same unhappy factor as the same chord played with open strings. Keep more to the lower strings as well to double down on the dark.

I find that if you get too complicated with your chords that they go from sad to more complex emotions. Chords with a 9th in it is going to have too much going on to illicit that sad feeling that you’re trying to convey. In a true 9 chord it will also have the 7th, which is a lot for the listener to digest. 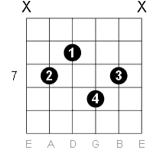 Don’t get me wrong it is a fantastic sounding chord. Sadness is a simple emotion, and it does not combine well with such a complex chord. Keep it simple.

Most guitar parts keep it very simple by playing the so called “power chords.” These are chords that only have the root and the fifth of the chord. To get to sad you need to leave these overly simple chords un-played, otherwise you’ll have to rely on the lyrics to make the audience cry.

I know of sad songs that are in major keys. It has a lot to do with context, and how a song is played. “Lightning Crashes” by Live is in B major, but is unbelievably sad (the sus2 is part of the reason it sounds so sad). I even played it a step higher in C major, and it still sounded sad. The slower tempo and lyrics also add to the melancholy of the song, plus it is all played in the lower register of the guitar.

To be honest the saddest chord is the one you don’t play. Do you know where your guitar is? Pick it up and play it. It misses you.