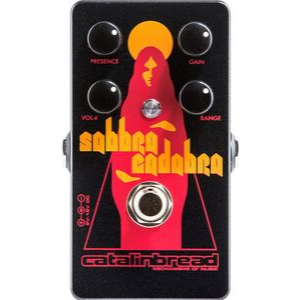 In the ranks of hard rock and heavy metal, few guitarists are as unanimously respected as Black Sabbath's Tony Iommi. The beefy, saturated tones he employed on classic albums like Paranoid have gone down as some of the greatest in history.

Catalinbread Effects, based out of Portland, Oregon, is known for their modern takes on classic sounds from historic players and pieces of gear. Their Sabbra Cadabra pedal offers an outstanding recreation of Iommi's signature sound that's re-contextualized to easily slip into your rig without any other modifications.

Once you hear the sounds that this pedal kicks out, we're confident that you'll rate it as one of the best overdrive pedals available. Let's take a closer look and get into the details!

If you take a look at the face of this pedal, you'll notice four knobs controlling all of your tone. From the top left, they measure presence, gain, volume, and range, respectively. Some of these controls are pretty self-explanatory, while others are more difficult to decipher.

The gain and volume dials are easy to understand — simply turn them up to increase how much noise the pedal emits and how dirty it sounds. However, it is important to understand that the volume on this pedal isn't just projecting your sound louder; it actually affects the tonal character of your signal depending on where you set it. At lower volume settings, the Sabbra Cadabra can actually clean up to resemble a genuine amp.

The presence knob acts like a sort of high-pass filter; turning it up will inject a bit of extra top-end into your tone and help you cut through a mix on stage. The range dial, meanwhile, functions similarly to a light compressor. If you pull this knob back, your tone will sound focused and locked into a very specific frequency range. Opening this knob up widens the spectrum of dynamic and harmonic possibilities for a full and rich sound. 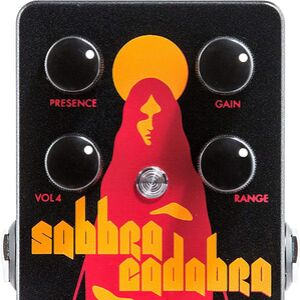 On the surface, it seems like the Sabbra Cadabra is just a way to reverse-engineer Tony Iommi's sound — put in your clean tone, in other words, and get full-on Black Sabbath out. That perception sells this pedal way too short.

One of the greatest features of this device is that it is not a distortion pedal, as you might assume. Instead, it's an overdrive unit built to emulate the sound of a Laney tube amp with a treble booster fed through the front. In fact, the Sabbra Cadabra copies the circuit of a vintage Laney amp exactly! The only difference is that the pedal uses JFETs instead of vacuum tubes to compress the size down.

In practical terms, this means that you can clean your tone up with the Sabbra Cadabra engaged, just by rolling back the volume on your guitar or pedal. Between the lowest and highest gain settings, you'll find plenty of room for variation and exploration.

Catalinbread built this pedal to be a “foundation overdrive,” meaning that it has the versatility to always remain on and at the front of your rig. You can run your amp through it for your whole set without missing a beat! As a bonus, this pedal comes in a rugged metal housing. It's finished in black with a foreboding red and orange design that instantly reminds you of Sabbath.

Even though this is technically an overdrive pedal, the Sabbra Cadabra's sounds remind you more of distortion and even some fuzz. With the gain knob dimed, the sound carries an intense saturation that comes out of the amp in waves. There's plenty of bass here to satisfy any player, and the exceptionally responsive touch makes this far more fun to play than most other competitors.

However, the really impressive thing about this pedal is how much clarity it retains. Unlike many distortion and fuzz pedals, it doesn't turn your tone to complete sludge — trebles are present, while the bass is tight and loud, and the midrange remains distinct. And unlike other static dirt boxes, you can actually clean this unit up as you adjust the volume and gain.

The range and presence knobs are particularly unique features. Guitarists who love to use heavily distorted tones often face difficulties trying to stand out in a crowded live setting. The presence knob doesn't eliminate your bass response, but it does inject just enough extra treble frequencies into your sound to make cutting through much easier.

Meanwhile, the range knob is an interesting dial to play around with. Many guitarists will prefer to leave it open or mostly open, just so that they don't limit the rich harmonics and overtones that distortion boxes like the Sabra Cadabra naturally provide. Focusing your range knob back, though, produces a compressed, focused sound that punches through with a thick, physical presence.

Catalinbread's roster of “foundation overdrives” that replicate the sounds of classic amplifiers and artists may not appeal to everyone. The Sabbra Cadabra, in particular, is a very focused pedal — it lacks a concrete appeal for players who aren't interested in Black Sabbath-style saturation. If you are a fan, however, or if you're looking for a responsive overdrive pedal with tons of gain on tap, it's hard to go wrong with this unit.