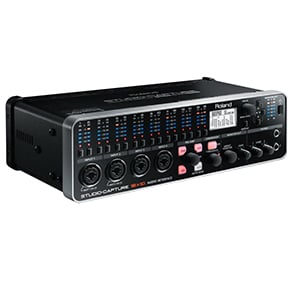 Roland’s audio gear has gathered a huge fan base over the years and it’s no surprise considering how long they’ve been in the game. Ultimately, experience results in some epic products! While they aren’t known for their audio interfaces, their high-end Studio-Capture is a great example of this fact, and proves one of the most capable sub-$1,000 audio interfaces on the market today. Time to take a closer look! 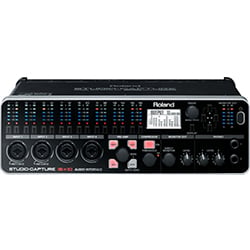 Many users wanting an expensive audio interface packed full of features will go for a rack-mounted design for obvious reasons. However, while the Studio-Capture is capable of being rack-mounted, Roland have delivered an interface that’s just as suitable for a desktop – one that brings just about every feature you could imagine in a relatively compact device.

For this, Roland had to find a good balance between functionality and size. At 11.2” by 6.37”, and with a considerable height of 3.5”, the Studio-Capture is definitely not a small unit, but it isn’t gigantic either. It comes in a rock-solid aluminum chassis with all of the controls and some inputs being placed on the front panel. This front panel is very busy – you will hardly find an inch that isn’t taken up by a button, knob or some other type of control. From an aesthetic point of view, Roland’s Studio-Capture oddly draws its appeal from its complexity. 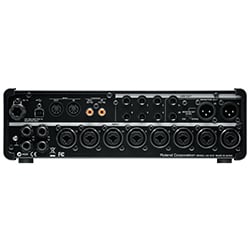 At the core of the Studio-Capture we find 12 awesome microphone preamps, which belong to Roland’s elite series. These are digitally controlled and offer a lot of versatility. Overall, you are looking at a total of 16 inputs (12 XLR/TRS combos and four 1/4” line ports) and 10 outputs, all of which are analog. Four inputs are on that busy front panel, while the rest are tucked away round the back.

The Studio-Capture features a centralized control interface that includes a small LED display panel. We also have the metering cluster with very precise peak indicators for all 16 inputs. In this unit, Roland has included their AUTO-SENS technology, which sets optimal levels for all of the built-in preamps – this is a very handy and time-saving feature.

Finally, this model features internal 40-bit DSP processing for cue mixing. Note that, while this unit uses USB 2.0 as standard, you can still count on having a 192kHz sampling rate at 24-bits.

Once put to use, Roland’s Studio-Capture shows why it is one of the best choices in its class. For starters, the audio quality of the built-in preamps is just pristine, with ultimate clarity and borderline perfect transparency. No matter what you hook into the Studio-Capture, you won’t see those preamps struggling.

One of the main concerns, with so many channels present, was the use of USB 2.0. However, Roland has addressed this by implementing their VS STREAMING technology, which reduces latency to a very acceptable level. It won’t be able to beat an interface that uses Thunderbolt or similar, but it definitely optimizes the signal chain for USB 2.0’s bandwidth. One of the more pleasant surprises was the AUTO-SENS feature. Not only does it work, but it works so well you never have to manually adjust levels, saving so much time and hassle in a busy recording scenario.

With the Studio Capture, Roland has really pushed the boundaries of home recording interfaces to another level. It’s built to last, intuitive to use and sounds excellent. The degree of performance and the amount of features Roland have crammed in makes this interface hard to beat, even at this higher-end price.