The first thing that comes to mind when people talk about PRS guitars is balanced tone, great expression, and just overall range you get. Or, in short, Carlos Santana. Their SE Custom semi-hollow body guitar has proven to be one of the best in its category, prompting many to change the way they think about this brand. 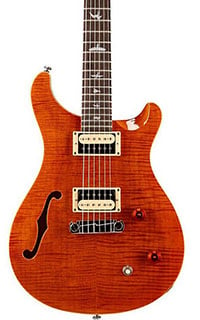 Semi hollow-body guitars are known for their f-holes. PRS followed suit and included a design of their own, which can still be considered conservative for the most part. Speaking of which, we are looking at the standard PRS SE shape. Tonewood used for this guitar is mahogany paired with a nicely finished maple top. All in all, pretty standard for PRS. The neck is also among their standard designs, offering a 25-inch scale on a smooth rosewood fretboard. The way the entire thing is built lets you know you’re dealing with a quality instrument. It feels solid in your hands.

When PRS designed this guitar, they knew exactly what they wanted to install in terms of electronics. Two of their PRS 85/15 S humbuckers were perfect for the job. We are talking about two perfectly balanced pickups which have just enough range to attract all kinds of guitar players, but also an uncompromising level of clarity and flexibility. This guitar is designed to be handled, which is only made even more clear by the presence of a single volume and tone control. Everything is put together with great quality, just as you would expect. In terms of hardware, you won’t see any tail end pieces or similar stuff. This semi-hollow is a bit different. Instead, you have a rather standard Tune-o-Matic bridge which definitely makes things easier. The aesthetic of tailpiece is attractive, that’s for sure, but it can be a real pain from a purely practical point of view. On the headstock, you’ll see a set of standard tuning machines. When it comes down to pure performance, the hardware simply works. The bridge keeps that intonation tight, while it also offers loads of sustain. That, as you might already know, works great with the semi-hollow nature of this guitar.

Many consider this to be an entry level semi-hollow guitar. In many ways, that is true. However, it punches well above its weight class. The tone sports a lot of range. In other words, you can get that trademark semi-hollow tone which many are looking for, but it’s a bit more rugged than usual. It’s somewhere between a solid body and a semi-hollow. For some, that is exactly what they were looking for, for others, not so much. No matter which camp you belong to, the fact is that PRS SE Custom 22 semi-hollow guitar brings that well respected PRS quality to the table.

At the end of the day, PRS SE Custom 22 semi-hollow offers a great way to enter this arena for a reasonable amount of money. This guitar will let you know whether or not semi-hollows are something that works for you, while still offering a solid foundation in case they don’t.