As anyone with a tiny bit of audio production knowledge will already know, PreSonus was one of the first brands to introduce the audio interface as a device to a mainstream audience. Their AudioBox iTwo 2×2 remains one of the best models under $200, even in 2018. Let’s take a look to see why it is so popular! 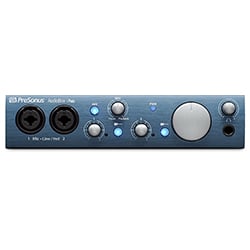 Aesthetically, the AudioBox Series has been pushing a very distinct design solution, which applies to all of the models in the collection, including the iTwo 2×2. It takes a different stance on the traditional design, with a cool blue brushed metal chassis and a slightly odd diagonal grid pattern for the controls – this takes a bit of getting used to but, when you do, it works!

The build quality is also very impressive and feels capable of being bashed around, whether on your studio desk or in a backpack. On that note, at 7.6” wide and 5.3” deep, it’s a pretty lightweight and portable device, so proves a smart choice for those who record music while away from their desk. In terms of features, the iTwo 2×2 is more or less a standard package, with two inputs (in the form of joint TRS/XLR ports), two outputs (main 1/4” TRS line out) and gain control knobs for both channels, as well as phantom power knobs and a standard headphone out as well. Perhaps it’s nothing to get too excited about, but overall a decent lineup.

Looking at the specs, the iTwo 2×2 is a 24-bit device with two solid Class A mic/instrument preamps, although only offering a 96kHz sampling rate. This isn’t ideal by today’s standards, but is generally more than sufficient for home use. What really defines this PreSonus interface is its reliability. This thing has been around the block a few times and pretty much any kink will have been ironed out by now.

Finally, the AudioBox iTwo 2×2 comes with a copy of Studio One Artist, which is a very useful DAW package for recording and editing music, especially if you don’t already have a DAW to hand.

The performance is definitely where AudioBox iTwo 2×2 shines. Despite its lower 96kHz sampling rate, it is still rock solid and consistent. You are looking at a very low latency, and – thanks to the mic preamps – a clear, transparent output. Note that it’s compatible with both Windows and Mac machines.

The AudioBox iTwo 2×2 from PreSonus is one of the older designs on the market, but with age comes experience. PreSonus has put a lot of this experience into delivering a consistent and reliable audio interface. It may not wow with its specs or design, but its core performance makes it a very worthwhile addition to your shortlist at this price.