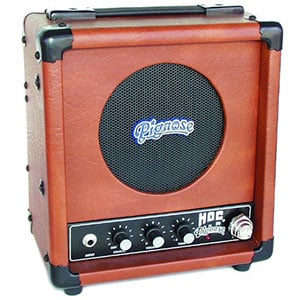 Since 1973, the American brand Pignose has produced a small range of popular retro-inspired portable amplifiers. Today’s focus, the Hog 20, sits in the middle of the range in terms of price, offering a step up in versatility and power over the smaller Hog 10. But the Hog 20 still comes in at under $200, meaning most players can afford to buy it. Does that mean they should? Let’s find out… 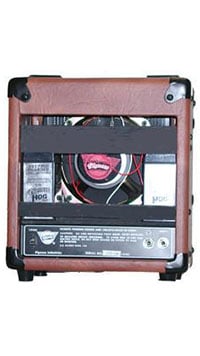 Although no match for some of the others in this price bracket, the Hog 20 comes with a small range of controls to make it a more versatile amp when compared to the minimalist Hog 10. Set at the bottom of the amp on a front-facing strip, these comprise a volume and tone rotary knob, as well as a ‘squeal’ control, for on-demand distortion. The power switch completes the control lineup, with a chunky feel and cool pig nose design. 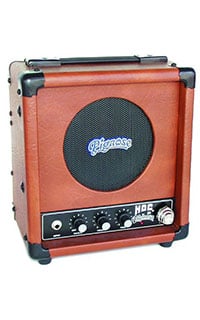 While it lacks the onboard effects, modelling and tuners of some other amps in this category, the design of the Hog 20 really sets it apart. With compact dimensions, the robust amp is covered in a cool vintage brown pigskin tolex, which resembles an old suitcase, while the speaker screen features the retro-inspired Pignose logo.

Looks aside, the Hog 20 features a 6.5” speaker offering 20 watts of power. On the subject of power, this is a battery-powered amp which can be recharged or run off the mains with the included adaptor. Battery life is decent, with around eight hours of juice between charges, so it’s great for busking or small performances where mains power isn’t readily available – the beach, for example. This amp also has two inputs (one on the front and back) along with a ¼” headphone jack on the rear for quiet practice.

For a relatively small, battery-powered amp, the Pignose Hog 20 has plenty of power and tone on offer, with more than enough grunt for everyday practice and smaller performances. Tonally, it is clean and warm, while the distorted tones are great for blues and classic rock. It’s not high-gain enough for modern rock or heavier metal, but it does take pedals well.

While this is a great amp for taking on the road, it shouldn’t be limited to this. With an awesome design, decent tone, simple controls and great price, the Hog 20 would make an excellent starter amp for beginners, or one for experienced players who simply want a good-looking amp for their living room.