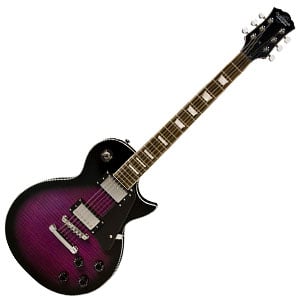 Most beginners and players wanting an affordable Les Paul will usually head for Epiphone – Gibson’s budget baby brother. However, by looking around, they will also see the OE20 from Oscar Schmidt. While the Washburn subsidiary doesn’t provide you with a big name, they do offer a worthy Les Paul which proves to be one of the best models you can find under two hundred bucks. Let’s check it out! 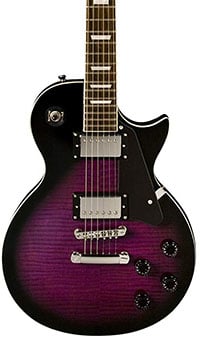 The OE20 doesn’t really try to offer anything new on the classic Les Paul style – and that’s a good thing for those wanting an authentic LP experience. This guitar shows off the tried-and-tested design, including a single-cutaway solid body, a 24.75” scale length and a raised pickguard. The body of the OE20 is made with mahogany and comes finished in several paintjobs including an elegant glossy black, a luxurious gold, and a newer translucent Purple Burst, which comes with a flamed maple top.

The neck of this guitar is also inspired by other Les Pauls, with a maple construction that’s set into the body instead of bolted on as you’d find with Strat style models or cheaper LPs. This neck features a very playable profile with a rosewood fretboard, 22 frets and trapezoid block inlays. On other Les Paul copies, the headstock is usually an area that gives away its budget price, however the OE20’s headstock keeps up appearances, with attractive binding and an abalone inlay. All in all, for a cheap Asian-made guitar, there are few complaints about the workmanship, although it would benefit from a good setup on arrival.

While the OE20 impressed in the looks and playability department, there’s enough in terms of hardware to keep you interested – providing you aren’t expecting a pro set of Seymour Duncans! It’s fitted with two unbranded stock humbuckers at the bridge and neck positions, which are controlled by two volume and two tone controls (one for each humbucker), and a three-way pickup selector toggle switch.

The headstock features a set of simple sealed chrome die-cast tuners, which do the job and feel decent to use, while the bridge sticks with tradition by using a fixed tune-o-matic design with a stopbar tailpiece for added sustain.

You’d be forgiven for having low expectations considering the wallet-friendly price, but the OE20 is in our chart of the best electric guitars under $300 for a reason! While it lacks a little complexity, the general tone is more than acceptable with crisp and articulate clean tones and plenty of punch when overdriven. For this reason, it’s very versatile for everything from country to classic rock and beyond.

Oscar Schmidt’s OE20 isn’t perfect, but considering it barely reaches $200, we didn’t expect it to be this good. It plays very well, it holds its own in the looks department, and the tone will impress experienced players as much as it will beginners. With Les Pauls this impressive at this budget price, why pay any more?