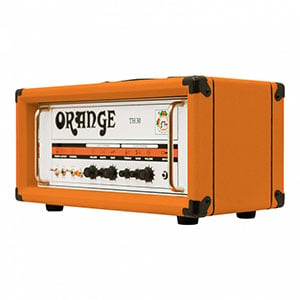 Since their heyday in the ’60s and ’70s, Orange amps have had a resurgence over the past few years. With high-end models like the TH30H it’s not difficult to see why. The impressive tones and intuitive controls packaged into this all-tube amp head make it a promising choice for your shortlist if you’re shopping around for a versatile stage partner in the higher end of the market. Time to take a closer look. The TH30H is an all-tube amp head rated at a top-end power setting of 30 watts, with options to take it down to 15 watts, or a living room-friendly 7 watts, based on your needs. With an overall package size of 21.65” x 10.63” x 9.45” and weighing in at 34.3lbs, it’s not exactly ‘lunchbox size’, but it is small enough to make transporting it around pretty easy going.

Inside that vibrant orange-vinyl covered head are four ECC83 preamp tubes, while its driven by four EL84 power amp tubes. Orange gives you two channels with this one – Dirty and Clean, which easily are toggled via a footswitch (although this is sold separately). It also features a buffered effects loop to squeeze maximum performance from your arsenal of pedals and/or rack-mounted effects units.

It’s important to note that the TH30H is a head only – there’s no built-in speaker, so you’ll need to have a cabinet to go with it. Refreshingly, there are no fancy-schmancy USB or Bluetooth connectivity options here either – this is a simple amp head with a very ‘old school’ mentality. And we like it. If you know anything about Orange amps, you know that they have a reputation for extremely simple controls. The TH30H is no exception.

The two channels have just three knobs each. The Dirty channel features a volume knob, a shape knob for overall EQ changes (ranging from boosted midrange at the zero position, to all bass and treble when it’s maxed out), and a gain control.

Controls on the Clean channel are just as simple, giving you a volume knob along with separate treble and bass knobs for tone shaping. It would have been nice to see separate bass and treble on the Dirty channel too, but we respect Orange’s minimalism.

You might think that the simplicity of the controls would limit how well you can craft your sound, but you can throw that idea out the window. The TH30H is an impressively flexible tone machine! The clean tones can range from smooth and rich, to jangly high-end funkiness. The Dirty channel? That single Gain knob allows you to easily dial in anything from classic blues breakup to full-blown metal mayhem with gain for days on end.

The EQ controls on both channels are unexpectedly responsive as well – it really is possible to dial in just about any sound that you can imagine, and you can do it with a simple twist of the knob. For this reason, the TH30H is a great choice for either the studio or in a live setting. We wouldn’t hesitate to use it for either.

Orange’s TH30H is a superb amp head that can deliver mind-blowing high-end tones for guitarists that play just about any style. You may feel unsure spending this amount on something with such minimalism in control, but the concern melts away after spending five minutes with this unit. The levels of simplicity, sound quality and portability will leave you wondering how they could cram so much tone into such a small package.