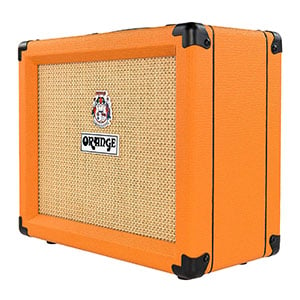 We’ve always believed Orange amplifiers look as loud as they sound – regardless of how small they are! Today, it’s one of the smaller Orange amps we are dissecting – the 20RT. Part of the Orange Crush range, which is the go-to amp for many recording artists, the 20RT is one of the smaller models in this collection and is ideal for practicing anywhere. It comes with a big reputation, but is it one of the best guitar amps under $200? Let’s find out. Orange makes arguably the most identifiable amps in the world, so we have to mention the bold orange casing before anything else. This iconic look has been rocking the biggest stages for decades. It's loud and in your face, but it's more than just a bright case – it has become a sign of quality.

The 20RT is a small 20-watt solid-state amp weighing under 16lbs, so it's easy to get around. Orange has crammed in their custom Voice of the World 8” speaker, which delivers plenty of punch and the vintage high-range that Orange does so well.

It has two channels – clean and dirty – which are complemented by a rather wonderful high-gain preamp and four stages of gain, meaning you get incredible detail in every tone from the cleanest to the dirtiest.

The features are rounded up by the super-detailed 3-band EQ, a built-in reverb with various reverb types, a very accurate chromatic tuner, and the awesome new CabSim feature, where the headphone/line-out beautifully emulates the sound of a mic’d Orange 4×12″ cabinet. 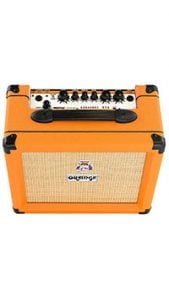 The 20RT has slightly more controls on the top panel than your average amp in this sub-$200 range. This begins with volume control for each channel and gain on the dirty channel to set the foundations of your tone.

Next, you have bass, middle, and treble dials to finetune your sound, alongside the channel switch, aux in, and headphones output. Under the main controls are the built-in reverb dial and chromatic tuner.

This is a small, lightweight amp so it's great for practicing on the go, although, thanks to the custom Voice of the World speaker, it will fill a decent sized stage too. The more portable an amp is, the more likely it is to get bumped around. But it’s in no need of coddling – the 20RT is built just as tough as Orange's bigger amps.

One great performance option is the CabSim feature, which, as we have mentioned, means you can rock out with the sound of a very impressively emulated Orange 4×12 cabinet if you hook it up to a mixer or don some headphones.

The 20RT will suit players of most styles, despite Orange being mostly connected with rock and blues genres. The 3-band EQ is very detailed, so whether you play rock, blues, or metal you can find the right tone for you.

The built-in reverb is pretty impressive too. It can be very subtle or extremely spacious, and the quality of tone doesn’t get lost in space either.

Orange has a stellar reputation among musicians for good reason, so we never expect a bad performance from their amps. With the 20RT, the versatility doesn't come from adding loads of built-in effects – it comes from doing the basics very well. Ultimately, this amp shows quality tone from a great manufacturer, while looking pretty killer too! For this affordable price, it’s hard to complain.