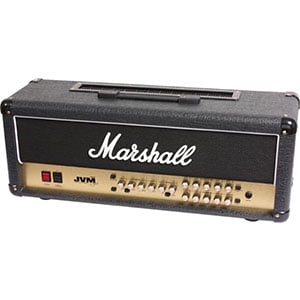 Unless you are a slightly overenthusiastic beginner, dropping $2,000 on an amplifier is something only a committed musician will ever do. Edging for a 100-watt all-tube Marshall head? Now, that’s a statement of intent!

The JVM210H is one of the most respected Marshall performance amps out there, with an army of avid users.This feature-packed amp head proves a key part of Marshall’s popular JVM Series and is worth taking a closer look at if the stage is your second home. First off, this British-built amp boasts classic Marshall design and looks just perfect sat on top of a 4×12 Marshall cab. Everything is stuffed into a no-nonsense black amp head with nothing more than the iconic Marshall scribble in the way of decoration.

Underneath these simple aesthetics lies an absolute beast of an amp. As mentioned, this is an all-tube unit, with five ECC83 preamp tubes and four EL34s powering it. Of course, there’s no built-in speaker, but, when plugging into a cab, this amp boasts an ear-splitting 100 watts of power.

As for channels, you’ll find two – a clean/crunch channel and an overdrive channel. Both offer three color modes (green, orange and red), with the gain ranging from near pristine cleans to epic distortion as you work up through the six. You can also add resonance, presence and an excellent digital reverb to both channels, with great effect.

Other than that, it’s a relatively simple amp. However, included in the price, you also receive a very powerful four-way programmable footswitch – more on this below. There’s a bit of a learning curve with the controls on this one, but they turn out quite simple when you get used to them. Working from left to right, you’ll find your master controls with volumes, along with reverb, presence and resonance settings.

Then comes two blocks – one for each channel – featuring the channel master volumes, EQ controls and gain, as well as the individual channel mode select switches. Your standard single guitar input is on the front panel, with other I/O options around back, including MIDI, speaker outputs and your effects loop.

If gain is what you want, then the JVM210H seriously delivers on all fronts. It’s been touted as the heaviest Marshall ever made and we’d be inclined to agree. Even crunch on the clean channel is as dirty as many amps will dare to go.

Switching to the overdrive channel, you have every kind of gain you’d ever need, from classic rock crunch right up to the filthiest distortion for modern metal. This channel feels tighter than the clean channel, with the low-end holding up very well.

But it’s more than just a gain machine. As the controls and features suggest, this amp is the definition of versatile. With the gain down, there’s loads of headroom for some beautiful cleans, which shimmer with a very soulful and organic feel.

The footswitch is a very handy addition. This is completely programmable, allowing you to prebuild your favorite settings, so you have exactly what you need on stage at the push of a pedal. Honestly, this is as good as it gets. Top marks!

There’s no getting around it – the JVM210H is insanely good. If gain is your end goal, this amp is sure to hit the mark, although it’s flexible enough to sound great when you dial things back and go clean. It’s therefore as suitable for lighter blues styles as it is modern industrial metal. If you are a regular performer and need big power to match a big tone, then this one should be a serious contender for your cash.