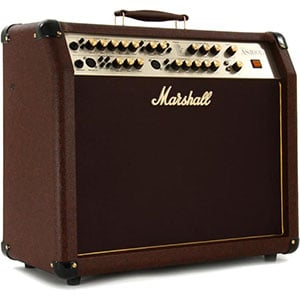 Ever since their revolutionary ‘60s combos, Marshall has been one of the world’s most famous electric guitar amp manufacturers – so much so that terms like ‘Marshall crunch’ and ‘Marshall 4×12 stack’ are instantly familiar to any guitarist.

Now, the British company brings their expertise to the world of acoustic guitar amps with the popular AS100D. Today we’re taking a deeper dive to find out why this amp is touted as one of the best acoustic guitar amplifiers on the market today. Designed with the gigging acoustic musician in mind, the AS100D offers three different channels – two for different acoustic instruments and a third channel for a microphone, allowing you to run vocals through the amp as well. The acoustic channels feature Marshall’s anti-feedback control, which eliminates instrument feedback across the channels for a cleaner, crisper-sounding performance.

Beyond the instrument channels, the AS100D also houses digital effects from reverb and delay to a host of modulation effects, while the included adjust and level controls allow you to fully customize your sound. The effects project in stereo through the amp’s two 8” speakers. At 4 ohms, this combo puts out 100 watts of solid-state power, making it powerful enough for jam sessions and more laid-back coffee-shop style gigs.

If it isn’t loud enough, the back panel holds a stereo DI output and stereo line out, allowing you to project your sound over larger PA systems without any hassle. With three channels and an abundance of available effects, it’s no wonder the control panel of the AS100D is a bit complex. With a bit of knowledge, though, it’s easy enough to get the hang of.

The acoustic channels offer slightly different controls from each other – they both offer phase switches, volume, bass, and treble controls, though the list diverges from there. Channel 1 has an additional switch for gain, as well as a mid-band EQ and a mid frequency sweep knob. Channel 2, on the other hand, displays a contour switch with an extra phantom power option. Anti-feedback controls for both acoustic channels follow.

The vocal channel has many of the same controls as the acoustic channels – namely a phase switch, phantom power option, and volume, bass, and treble EQs – though it also features controls for internal and external effects level, if you’re applying effects to your microphone.

Finally, the effects control follows, featuring 16 different digital effects along with adjust and level controls. Master volume and an aux input volume round out the panel. As mentioned above, the AS100D also features stereo DI and line outs, along with a pair each of instrument and XLR inputs, an aux input, and a footswitch input. If you’d like to add your own effects loop, the AS100D offers a send and return with a level control.

After just plugging in, the AS100D offers a bright, sharp scooped-mid sound. The mid frequency control on the first channel certainly offers a good deal of sonic flexibility. With it and the standard mid EQ cranked, the sound gets thick quickly – though without some adjustment this amp can sound harsh, coming on a bit strong through the top end.

With a bit of an electronic tinge to your tone, this amp doesn’t deliver flawless acoustic sound, but it does do a good job of not allowing too much electronic color into your ultimate signal. It manages to retain the acoustic character of your guitar and not turn it into a duller electric axe. Plus, with the plethora of different controls, pretty much any acoustic sound is within reach here.

Players might not use all the effects, but they’re solid and plenty of fun to play with; the reverbs in particular (including room and plate types) are good for adding that extra shimmer to your standard sound. The stereo speaker setup offers some additional features, like stereo DI and line outputs along with stereo effects, though the 8” speakers can sound tight when pushed or with the treble cranked. A single 12” cone might have been a better choice for this amp.

The Marshall AS100D offers acoustic players unprecedented control over their sound. The control setup, while a little confusing, makes pretty much any tone achievable. While the amp is voiced a bit sharp through the top end, adjusting the EQ can fix that without too much effort.

This combo really shines through the multiple channels and available effects – unlike some other acoustic amps, this can run two instruments (including one with an XLR input) and vocals all at the same time, meaning gigging musicians can use this single combo for their whole setup. The included effects only take the versatility here to the next level.