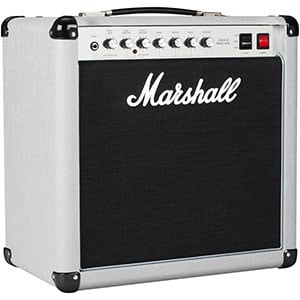 In 1987, the guys at Marshall were celebrating the brand’s 25th birthday, releasing the commemorative Silver Jubilee amp to mark the occasion. It was only in production for that year, which means finding an original is very tough (not to mention very expensive).

Despite the limited-edition nature of the Silver Jubilee, the guitar community demanded its return. Their wish was granted, as Marshall released both the reissued 2555x head, as well as a mini amp head and mini combo. Today it’s the latter we’re taking a look at.

As we just mentioned, the 2525C is the combo version of the reissued Silver Jubilee collection. That should be obvious from the design, as this high-end amp keeps in line with the special aesthetics of the original, with a suave silver vinyl and chrome plating. This is Marshall, but not exactly as you know it.

The amp itself is a relatively compact cube, built to high standards in Marshall’s English facility in Bletchley. The 2525C boasts three 12AX7 preamp tubes, a pair of EL34 power amp tubes and a single 12” Celestion G12M-25 Greenback speaker, which is responsible of delivering 20 watts of power. A neat feature is that a switch next to the power switch allows you to drop this down to 5 watts, allowing you to practice at more comfortable volumes.

This amp technically offers two channel – there’s a clean channel as well as a dirtier channel via the pull rhythm clip on the gain control knob. Around back, there’s an effects loop, along with five speaker-out options, a DI output and footswitch input (a one-button Marshall footswitch is included, which is expected at this price). 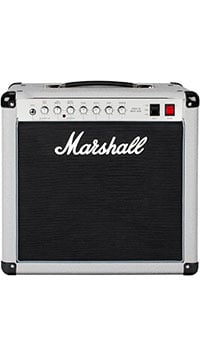 On the front panel of the 2525C sit the controls – memorize them, as the mirrored chrome makes seeing the labels a little tricky! Not to worry, this amp isn’t exactly swimming in controls, but what it does offer allows for good versatility.

Working from the left you’ll find your input gain (with that pull function for the dirty channel), a lead master volume and output master volume. Then come your three EQ controls for treble, middle and bass, along with a presence knob. Simple, but effective.

No complaints here – this is an incredible amp in terms of tone. The highlights of this amp are obviously seen as the gain increases, although, with good headroom, the cleans are beautiful – clear, responsive and sparkly.

Despite these surprisingly impressive cleans, it’s the dirty tones where the 2525C is at its best. Store your distortion pedals as you won’t need them! With the gain dialed up, the tone here is deep, thick and biting, while remaining articulate and dynamic. It excels at pretty much any style of rock, from Hendrix to Maiden beyond.

With 20 watts, it’s not the most powerful amp in the series, but it’s a British-made high-end Marshall so it shouldn’t surprise you to find out that it’s damn loud! It may struggle to fill an auditorium, but for smaller venues, 20 watts is the sweet spot. It also naturally excels in recording and practice scenarios.

Marshall listened to the community and crammed their reissued Silver Jubilee 2555x head into a smaller package – and the guitar world is thankful. This portable amp impresses on all levels, whether you are looking for a high-quality practice amp or a solid stage performer. It’s not the cheapest combo amp out there, but for such a sought-after tone and general feeling of fun, it’s well worth its asking price.