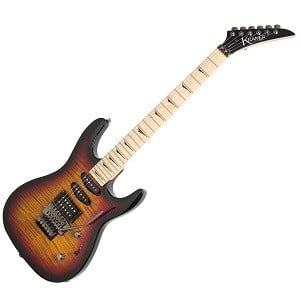 Kramer is one of those companies who like to give the leaders in the industry a run for their money from time to time. While they might not have all the heritage and history, Kramer has the skill and knowledge necessary to make impressive guitars. Their Kramer Striker Custom 211 shows us what the brand is capable of in the mid-range. If you have $500 for a whole setup and you want a great guitar, this is one of the best choices out there. Here’s why.

The shape of the SC 211 is the standard modified Strat that Kramer has been using for a long time. They offer this model in several finishes, all of which are pretty interesting, to say the least. Tonewood for the body is solid mahogany, although they did add a nice maple top for several models. The neck is made of maple and features one of the fastest profiles in the industry. It’s thin, wide, and just a blast to play if you’re going for speed. Even though it’s a relatively affordable guitar, the build quality is great.

Kramer wanted the SC 211 to be among the most versatile guitars in its price range. In terms of hardware, that meant a decent Floyd Rose bridge and an equally fitting set of tuning machines. That’s exactly what you get with this guitar. Hardware works great and tuning retention is something you definitely don’t have to worry about too much. Especially considering that you have a locking nut at your disposal. All hardware is painted black except for the Fireburst version, where it’s black chrome. 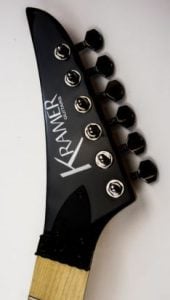 Compared to previous Striker Custom models, SC 211 we’re looking at here features an HSS pickup configuration. It’s a bit different, and some may be put off by the new layout, however we feel it’s an upgrade. With a single humbucker and two single coils, Striker Custom got infused with a new dose of versatility. It’s still that good old shredding machine, but now it can do a bit more than just that.

In terms of sound, things are pretty standard for Kramer. There’s a lot of width and the guitar is balanced from top to bottom of the frequency range. With that said, Strike Custom still does what it’s best known for – give you loads of sustain along with a good, punchy color. Whether you want to get into the harder sound territory, or stick around in classic rock, this guitar will deliver on point.

All things considered, many were skeptical when Kramer announced a change in the pickup configuration for the Striker Custom. As it turns out, that gamble was very much worth it. The new guitar is every bit as good as the previous models, only a lot more versatile this time around. If you’re working on a tight budget, this might be the best bang for the buck solution out there.