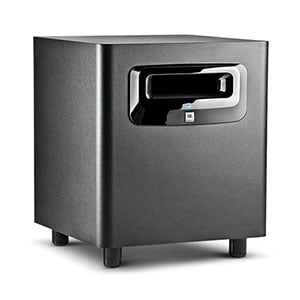 JBL's LSR series of monitor speakers need no introduction. They are among the most proven affordable solutions on the market. One of the least known members of this family is the LSR310S. Not only is it one of the most capable subwoofers under $500, but it's just impressive in practice. For the most part, JBL has always been straightforward with their speaker designs. They would implement design features aimed at improving the performance of their monitors. With that said, they have always kept it fairly conservative. JBL LSR310S deviates from that path, quite considerably. What we have here is a classic black box finished with black vinyl. It stands a couple of inches off the ground, which might reveal JBL's intentions. Its driver is actually mounted on the bottom of the cabinet, while the front panel houses a slotted bass reflex port.

Having a down firing subwoofer has its benefits and drawbacks, but it's arguable that it solves issues for smaller studios. How this impacts the performance is something we will touch upon a bit later. From an aesthetic point of view, if you didn't know what you were looking at, you could easily mistake LSR310S for a piece of furniture. 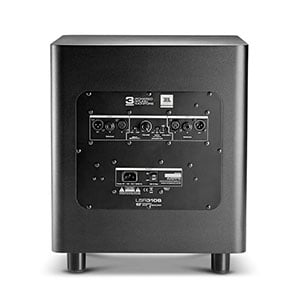 The reason why JBL's decision to go with a down firing woofer is so interesting comes down to a couple of factors. Down firing designs rely on gravity to take care of the transducer in a sense that the cone is under much less stress. This allows for a more sensitive cone that doesn't have to fight gravity. The 10″ drivers JBL went with is perfectly tuned for this purpose. Along with the front firing bass reflex port, it creates a very impressive output. Speaking of which, there is a 200 Watt Class D amplifier in there.

You are generally looking at 113dB of max peak SPL, which is more than decent. The back panel is where all the controls and I/O ports are. You are presented with a volume knob, polarity switch, sensitivity switch and the variable crossover. Stereo XLR/TRS inputs and outputs come as standard.

Just like the rest of the LSR series of studio monitors, this subwoofer shows its best tricks only when you plug it in. In terms of frequency response range, this bad boy goes down as low as 27Hz, allowing you to experience the full range of your lows. The tone it offers is tight, defined and pretty transparent. There is no exaggeration in those most vulnerable bass frequencies, thus giving you a fairly realistic picture of what is going on in your mix. That is partially due to the down firing orientation of the woofer and JBL's choice of hardware.

The front firing, slotted reflex port also helps a bunch as it is perfectly tuned. The only thing you want to pay attention to is positioning and decoupling of the sub from the floor. With down firing designs, it's a good practice to have a set of proper vibration dampers.

It didn't take long for us to realize that JBL nailed yet another successful LSR package. This subwoofer has all you could possibly need for true and transparent observation of lower end frequencies. For the most part, it offers one of the best value for the money ratios out there.