12 Interesting Facts About Guitar – The Big, The Small and the Weird!

Whether you are writing a quiz, want to impress your friends, or just have an insatiable curiosity about guitar, a good fact always goes down very well. This is why we have compiled 12 of the most interesting facts from the world of guitar – the biggest, the smallest and the weirdest!

#1 – The First Guitar was Created in Ancient Egypt

Well… in some senses it was, although the guitar-like instrument created 3,500 years ago (now, that’s a vintage guitar!) is a far cry from the guitars we play today.

It belonged to a singer of the time known as Har-Mose and was made from polished cedar with a rawhide soundboard, featured three strings, and even had a plectrum device attached to the instrument via a chord. This intriguing guitar heirloom is on display in the Archaeological Museum in Cairo. 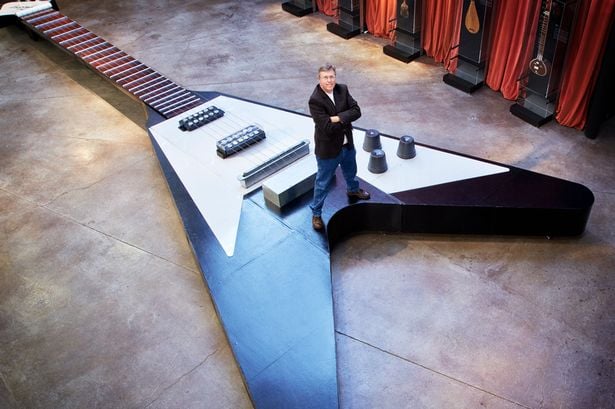 That’s right – the world’s largest guitar, certified by the Guinness Book of World Records, is over 13 meters long (about 43ft). That’s about the length of a bus! Even more impressively, it is more than just a model – it is actually a playable instrument, with each string delivering the correct pitch.

The guitar, which was made by the Academy of Science and Technology in Texas, weighed a whopping 2,255lbs (just over 1,000kgs), took almost a year to build, featured aircraft cable for strings, and was in the iconic shape of a Gibson Flying V.

Unless you have particularly nimble fingers, you won’t be able to play this guitar, which comes in at 1/100,000 of a meter long (about the size of a single cell).

Made by researchers at Cornell University in New York, the double-cutaway style guitar actually had strings capable of being strummed (by specialist equipment, obviously), although the frequencies are so high they are inaudible to the human ear.

#4 – The Most Expensive Guitar Ever Sold for $2.8million

Created by Fender, the truly one-of-a-kind ‘Reach Out To Asia’ Stratocaster was sold at auction to raise money for victims of the 2004 Indian Ocean earthquake and tsunami.

While the white Strat itself is rumored to have cost Fender around $20,000 to produce, the final price reached millions due to the unique ‘decoration’. This came in the form of signatures across the face by 19 guitar icons. These included Mick Jagger, Keith Richards, Eric Clapton, Brian May, Jimmy Page, David Gilmour, Jeff Beck, Pete Townsend, Paul McCartney, Sting and Bryan Adams (who conceived the Reach Out to Asia project), among other legends!

#5 – Gibson Made the Most Luxurious Guitar of All Time

While the Fender Strat we mention above was valuable due to the collection of iconic signatures, in 2015, Gibson unveiled a guitar worth nearly as much due to the opulent materials used to decorate it.

Working in conjunction with jewelry designer Aaron Shum, and musician and designer Mark Lui, Gibson’s creation – dubbed the ‘Eden of Coronet’ – is a white SG featuring more than 400 diamonds in addition to around 1.6kg of 18k gold. Put us down for five of them!

#6 – Somebody Once Played Guitar for Four-and-a-Half-Days In 2011, Irish guitarist Dave Browne set a new world record for the longest guitar session ever. The talented guitarist played non-stop for 114 hours, 6 minutes and 30 seconds, between 12 and 17 June.

The mega session took place in the famous Temple Bar Pub in Dublin, Ireland (which remained open for the duration of the gig) and Dave had breaks of no more than 30 seconds between songs. On a guitar lent to him by Stevie Ray Vaughan, Dave played a total of 1,372 songs, finishing with the U2 classic, ‘With or Without You’.

#7 – A Man Once Married His Stratocaster

In 2001 a British musician, Chris Black, fell so madly in love with his red Fender Strat – known by the name ‘Brenda the Fenda’ – he married it, after 35 years of ‘dating’. The ceremony was held in a church in London and was officiated by a friend.

The guitar was technically his second ‘wife’, as Chris was also married to a human woman at the time. Never taking himself too seriously, Chris said, ‘It was only for a bit of fun, to help cheer people up.’

However, to burst the bubble slightly, it is agreed that David Gilmour’s Strat is more likely a showpiece than the first actual production model (see below). Regardless, it’s one hell of an iconic axe!

#9 – …Although Only George Gruhn Knows Who Owns the First Stratocaster

While David Gilmour owns the Strat with the coolest serial number, the first-ever Stratocaster (which actually came with the serial number of #0100) was sold by George Gruhn’s vintage guitar store in Tennessee for a staggering $250,000.

George sold the sunburst-finished Strat – which was made in April 1954 – in 2014, although the current owner remains anonymous. All he has revealed is that the new owner is not a professional musician and they live in the United States. And they are very lucky. 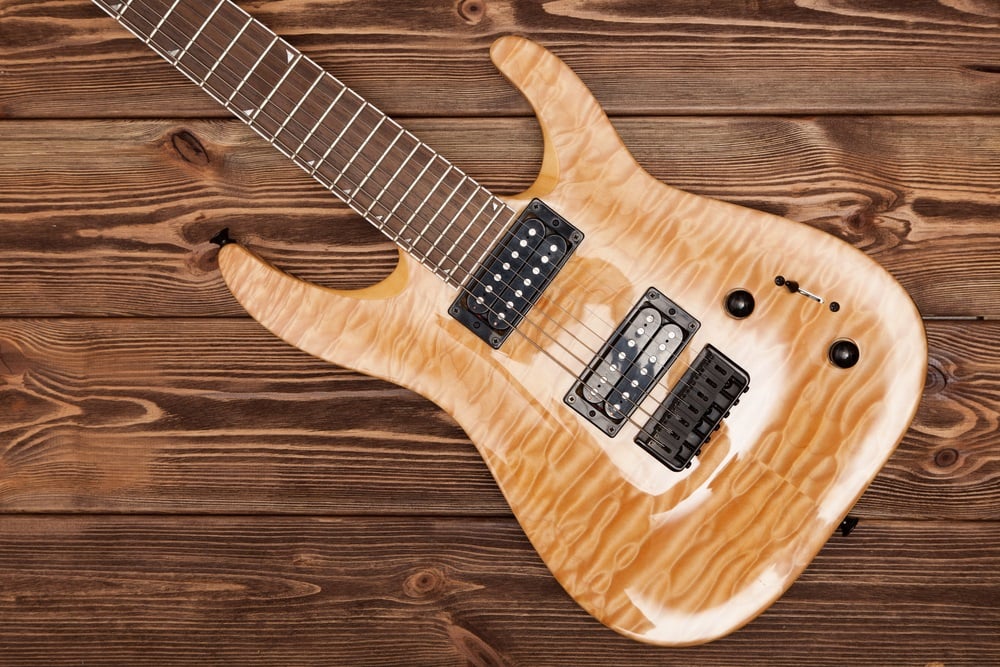 While other brands, such as Fender, had been developing guitars with extra strings, it was Ibanez who became the first brand to mass-produce guitars with both seven strings (introduced in 1990) and eight strings (arriving in 2007).

Interestingly, the 7-string guitar was originally going to have a high A string instead of the low B string we know today. Thankfully – especially for the world of metal – it went the right way!

B.B. King famously named his guitars Lucille. The reason? One evening, while playing at a dance in Arkansas, two men began fighting over a woman. The result of this was a barrel of kerosene being knocked over, causing a fire which turned the dance hall into an inferno.

Once outside, King realised he had left his prized Gibson inside, so darted back in to save it. The following morning, he christened his guitar ‘Lucille’, which was the name of the woman who inspired the fight. This was, as the great man himself once said, ‘to remind me never to do a thing like that again.’

One of the fastest guitarists in the world, Michael Angelo Batio, is famous for his double guitar, but did you know he was also the first to have a custom-made quad guitar?

The unique guitar – featuring two 6-string necks and two 7-string necks – was built by Wayne Charvel at Gibson and used for the solo in the video for Nitro’s ‘Freight Train’ (see below). However, the axe was stolen during a show in El Paso soon after. Thankfully MAB was eventually reunited with the guitar but, as the shredder himself explained, ‘Years later, we found [the guitar] in England and I had to buy back my own guitar for £1,500!’

So that's about it! Got some interesting guitar fact you want to share with GuitarFella? Please comment below!