We must start this review by saying ‘happy anniversary’ to Image Line’s FL Studio, who are celebrating their 20th year in 2018 with the newly-updated FL Studio 20 Producer Edition! A little confusingly for regular users, this is actually the 13th iteration of the popular DAW – not the 20th (it’s just named that way to commemorate the special occasion). Let’s take a closer look to see whether it is worth the upgrade. In the past, people have been quick to criticize the way FL Studio looks and operates, but we are big fans. If you have used this DAW before, you will feel right at home as version 20 builds on the previous UI. Instead of one single timeline, FL Studio splits creative, mixing and arrangements into their own individual UI windows – in practice, we feel this really helps the workflow, although we can also see why some people brandish it as a bit cluttered.

In terms of pure aesthetics, FL Studio 20 Producer remains pretty retro with a dark color scheme, which will appeal to some, while others will prefer to look at something a little more modern. A plus is that version 20 retains the solid vector graphics that were introduced in the previous iteration. 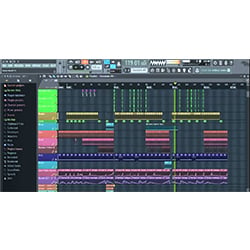 The very core of FL Studio is on-site composition, mixing and mastering and FL Studio 20 Producer builds on this, with minor tweaks and additions to offer even more creativity and power. You get the typical range of features that previous users will be familiar with, such as effects chains, audio sends, sidechain control, advanced automation and plugin delay compensation.

In this newest iteration there are actually not many new sounds or effects, although it comes stocked with more than 80 different instrument and effect plugins, from distortion and compression to delay, phasing and chorus. Truth be told, FL Studio 20 doesn’t feel as exciting as some of its counterparts, but it sure is a rock-solid platform.

Firstly, it’s worth noting that – for the first time – Apple users don’t have to miss out! With version 20, a native 64-bit Mac version exists for use on OS X/MacOS (requires OS 10.11 or later). In terms of stability, version 20 runs very solidly on both PC and Mac. It is undoubtedly a powerhouse when its features all come together and is an essential consideration for those looking to get into music production. It can be a little overwhelming in the beginning, but version 20 proves once again that FL Studio is worth sticking with.

FL Studio 20 Producer may not revolutionize this long-running DAW, but it brings a familiar core performance with enhanced features. Worth the upgrade if you have version 12? Probably – although you may want to wait until the next version comes out to really see some bigger differences. But with a forgiving nature and practical layout, it remains a go-to platform for both beginners and experienced producers.