We’re in a point in time where everyone’s heard of Ibanez in one way or another, and deservedly so. Arguably the best guitar manufacturer of all time, they’ve been delivering high-end wonders on the worldwide market since 1957. Although their main area of expertise is actual guitars, they also specialize in manufacturing effect pedals rivaling at the top with some of the best. One of these aforementioned pedals is the Ibanez Weeping Demon Wah pedal, a breathtaking well-rounded work of art by the ingenious designers over at Ibanez.

This sleek aluminum silvery pedal is packed with an immense amount of features and controls unlikely to be found on similar competitive wah pedals, complementing its well-versed design and functionality. A distinctive base feature is that this pedal operates using “electro-optical” technology, in place of a potentiometers or inductors regularly found on different “wah” pedals.

First and foremost, on the left side you’ll find a large lever that sets the operational style, placing it in its rear position makes the pedal go into “Auto-Switch” mode – pushing the footswitch forward automatically engages the “wah” effect, taking your foot off it afterwards disengages the effect after a short delay.

However, if you prefer the standard method of work, placing the lever in its forward position sets the operational mode to “Foot-Switch” mode – giving you complete free floating control, while the tiny battery box on the right acts as an on/off switch. 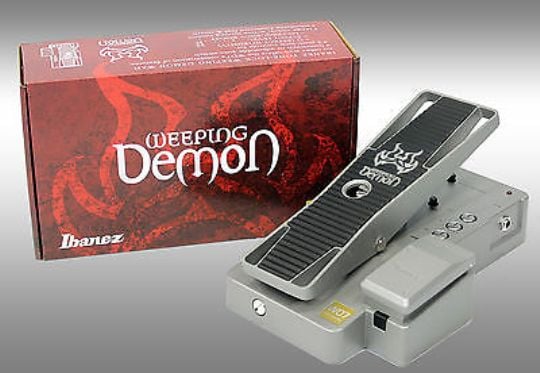 The switch on the right side allows you to shift through frequency range of your effect (low & normal). Above the switch you’ll find three tiny control knobs aiding in extra customization: Level – the pedal’s overall output level, “Q” – controlling its resonance frequency and Lo – low frequency cut-off. The knobs are tied to a spring lock, meaning after you set them you can push them down in the box nullifying any chance of accidental re-adjust.
Lastly, above the pedal’s “treadle”, we have two tiny knobs controlling the pedal’s frequency limits, and the amount of time before the “wah” effect disengages when in “Auto-Switch” mode.

This masterpiece outputs rich and harmonically wonderful tones reminiscent of inductor based pedals., however it can truly shine in high gain settings when turned up to its limits, producing fierce “growls” while pushing the wah effect to the nth degree. Pick your preferred genre and style of play and this beast will adapt at will, following you and your guitar every step of the way. This versatile pedal leaves nothing to be desired, it’s a fine piece you can keep forever. Its limitless capabilities offer shaping sounds and styles attuned to your taste that will thrill you and everyone in close proximity.

The Weeping Demon is a force to be reckoned with, offering superior control over your sound backed up with insane sound quality and versatility covering all genres of music. All available at a surprisingly affordable price tag, grab it now and safely put your worries to rest.