Imagine you’re 14 years old, and you’re gazing up at a window display of guitars, gleaming and golden, slick and polished, strings looking as though they’re aching to leap into life under your fingers.

Sound familiar? It’s probably safe to say that every kid, and plenty of adults, still have this fantasy, and there’s one company that knows it.

Ibanez (Eye-buh-nezz) is a guitar manufacturer with an unlikely story. From its beginnings as an offshoot of a Japanese bookstore to its position as one of the premier guitar brands in the world, this brand has come quite a long way. Guitarists like Soilwork’s Dirk Verbeuren, Metallica’s Lars Ulrich, or the legendary Eddie Van Halen have all played Ibanez guitars on many of their best-known and best-loved projects. So let’s have a look at how we got to now.

The Beginning: the Hoshino Company

In 1908, at the tail-end of the Meiji Era, Japan’s period of rapid modernization, entrepreneur Hoshino Matsujiro established the Hoshino Shoten bookstore in Nagoya. Apart from books and newspapers, Hoshino sold sheet music and instruments. Especially popular were Western instruments which flooded Japan as trade with Europe and North America grew. “GUITAR MAKING” by Clément Gaud is licensed under CC BY-NC-ND 4.0

Before long, Hoshino realized that there was one instrument above all that was too popular to ignore: Acoustic guitars.

He realized that the low cost, versatility, and ease of learning the guitar meant that those instruments were a sure thing.

So in 1929, he formed the subsidiary Hoshino Gakki Ten company for the importation of acoustic guitars made by Spanish luthier Salvador Ibáñez é Hijos (1854-1920), prized for the quality of their workmanship. With the knowledge gained from sales and feedback from his customers, Hoshino Gakki was sooned reoriented towards manufacturing their own line of guitars, at first called Salvador Ibanez (minus the accents), despite having no connection with Ibáñez himself.

In 1935, the company settled on the now iconic name – Ibanez.

With that one choice, the stage was set for this once-small company to take the guitar world by storm.

World War II was a difficult period for Ibanez. Musical instruments were overshadowed by military production, and the company’s factory in Nagoya was destroyed in bombing raids by the US Air Force. With the rest of the Japanese economy suffering from the fallout of the war, Ibanez was sorely in need of a break.

Luckily, one was just around the corner.

“GUITAR MAKING” by Clément Gaud is licensed under CC BY-NC-ND 4.0

In 1955, Matsujiro’s grandson, Hoshino Masao, rebuilt the factory in Nagoya, still in use today, and turned his attention to a post-war boom that was just what Ibanez needed: rock and roll.

With the explosion of early rock in the 1950s, demand skyrocketed for electric guitars, and a resurgent Ibanez was exactly where it needed to be to meet it. A burgeoning electronics industry furnished the company with the necessary equipment to quickly and cheaply produce quality electric guitars and amps like the Ibanez EG1800 Rhythm or the Guyatone LG-30. In addition to guitars and amps, the company also began producing drums and bass guitars.

In fact, Ibanez soon found they couldn’t keep up, and began to contract outside companies to help them with the manufacturing of their products.

In 1962, the subsidiary Tama Seisakusho Incorporated was founded to manufacture electric instruments and accessories. At the same time, the company continued to produce acoustic guitars to meet the demands of traditional and folk musicians, both genres which experienced a renewed interest in the ‘60s.

So why did Ibanez do so well out of this?

There were a few reasons:

But before Ibanez became famous worldwide, they first became infamous.

The event that helped them gain a profile outside of Japan? A lawsuit.

The Crime That Made a Fortune

Rock and roll continued to conquer the airwaves, and every teenager in North America wanted a guitar to awkwardly strum out chords with hopes of stardom, or at least of impressing other kids. But iconic American brands like Rickenbacker, Gibson, and Fender simply couldn’t keep up with demand without sacrificing quality, and so, unfortunately, that’s just what they did.

While aspiring and professional musicians everywhere were getting fed up with the rising costs and decreasing quality of the guitars on offer from domestic manufacturers, Hoshino was looking for a way into the US market.

That year, guitar maker Harry Rosenbloom, who crafted handmade guitars under the brand name “Elger,” decided to give up manufacturing. He recognized that an independent craftsman had no chance of meeting demand if larger companies like Fender couldn’t, and understood that only another large-scale manufacturer could fill the gap.

Offer his own Medley Music Company in Pennsylvania to Hoshino Gakki, to act as the sole distributor of Ibanez guitars in North America.

Both Hoshino and Rosenbloom understood the key to branding: Appearance is everything. At the time, it was pretty common to simply copy the designs of successful companies and put their own names on the product. While this was, from a copyright perspective, morally dubious, if not illegal, it usually wasn’t worth the trouble of legal action by larger brands.

With this idea in mind, Ibanez began copying the headstock and neck design of Gibson guitars, especially the famed Les Paul, capitalizing on the design recognition the brand enjoyed. An entire market of amateur or less well-moneyed guitarists who wanted Gibson guitars but couldn’t or wouldn’t afford one suddenly had a much more accessible option.

Well, Gibson didn’t think so, and in 1977, filed a lawsuit in Philadelphia against Hoshino U.S.A. for copying their products.  Hoshino settled out of court the following year, but the near-exact copies of Gibsons and Fenders became known as “Lawsuit Era” guitars. Even now, these guitars are prized objects, their infamy having become part of their appeal.

But the Lawsuit Era wasn’t just good for intellectual property rights. For twenty years, Ibanez had built up a secure North American customer base along with brand recognition, reinforced by the court case. With this profile, they began to move away from copies and instead put their energy into their own designs, such as the Ibanez Roadstar or the now-archetypal Iceman series.

Firmly established as a brand in their own right, Ibanez prepared for the next step of their journey.

With original designs and steady sales on their side, Ibanez began looking to capitalize on decades of guitar-making experience through one of the oldest tricks in the book: Celebrity endorsements. 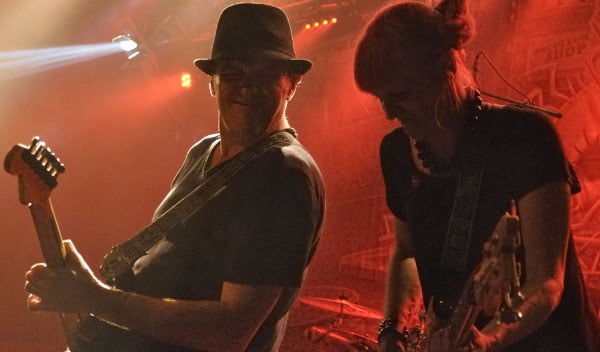 “Les Splendifics” by Eric Duquenoy is licensed under CC BY-NC-ND 2.0

Hoshino had shaken its image as a copier of better designs and was beginning to gain recognition as both a quality manufacturer and an innovative designer, but they needed someone to give them an edge, someone with both name recognition as a great musician and with the chops to back it up, as well as someone respected within the music industry.

How Ibanez and Vai came together is a pure stroke-of-luck story.

By 1986, Vai had grown dissatisfied with what he saw as the inadequacies of contemporary Fenders and Gibsons both of which sold models that had features he liked, but neither of which marketed an instrument combining all of his preferences. Ibanez, hearing that one of Vai’s guitars had been stolen while on tour, offered him a replacement which he could design. Vai, who wanted a steady supply of guitars, agreed on the condition that the result would become a production model rather than a custom one-off.

The world sat up and noticed an artist who had played with David Lee Roth and Ozzy Osbourne endorsing a once-obscure Japanese guitar maker. Ibanez also attracted attention for the unusual guarantee that each of their guitars had been played by hand to ensure quality before being sold.

Ibanez had finally arrived at center stage, having earned a reputation as a high-quality manufacturer. They even began selling their own products in their native Japan for the first time in 1982. Ibanez continued to experiment with new materials such as the pressure-cast plastic Luthite for their Ergodyne series. At the same time, the company carried on growing their business, opening a branch in Los Angeles to cater to the professional trade, while expanding to South Korea and China for both manufacturing and to meet the needs of blossoming pop and rock scenes in both countries.

With their success and willingness to take risks, as well as the attention they pay to what their customers want and what works, Ibanez is sure to be producing quality instruments and gear for a long time yet.

Please include attribution to https://www.guitarfella.com/ with this graphic.