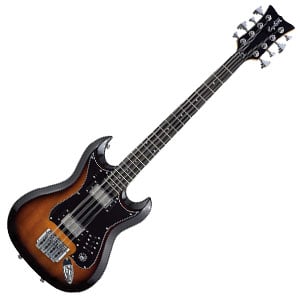 Sometimes things are so nice, it makes sense to do them twice! As the name of this bass suggests, the Hagstrom H8II Retroscape is a reimagined version of the original H8 – the first mass-produced 8-string guitar, utilized by everybody from Jimi Hendrix to Lemmy. It’s a prime example of a reborn legend coming back to life, but with even more things to admire the second time around… Starting off with the body, it is almost a carbon copy of the original 1967 model. The attractive contoured dual-cutaway design is constructed of a solid piece of mahogany. This is a great tonewood to help project tone from the – count ‘em – eight strings (that’s four standard strings and four octave strings, similar to a 12-string guitar).

The bolt-on neck is certainly in a league of its own compared to many other bass guitars. This is thanks to a few features that are unique to the Hagstrom design and construction. Starting off, it’s made out of hard Canadian maple. However, there’s no typical, run-of-the-mill truss rod here. Instead, we have a patented Hagstrom H-Expander truss rod. The H-Expander is constructed from a lightweight alloy that is extruded in a custom shape to provides tension on both ends. It also adds strength to a notoriously weak point on the neck.

Topping it off is the Resinator fingerboard. This material looks, smells and sounds like ebony, but it is actually a wood composite that is much more stable than the real thing. A good addition, which houses 21 frets. The hardware on the H8II-TSB doesn’t disappoint either. Starting off with the tuning machines, they have two different gear ratios of 22:1 and 18:1 (one for the ‘standard’ bass strings, and one for the octave set) for smooth and precise adjustments.

The two pickups are powerful Hagstrom DynaRail humbuckers, tended to by some nifty controls – what would a Hagstrom guitar be without a myriad of slider switches? (At least, that’s what we recall – the Hagstrom was the first electric guitar for one of the older dudes on our team!).

The H8-II doesn’t shy away from them, giving you four sliders: one to turn on and off each pickup individually, and two others for additional tone controls. The standard volume knob also features a push/pull option for coil splitting.

The nut is a Graph Tech Black Tusq XL for maximum tone, and the chrome-plated bridge tops it off with a full range of adjustability over each pair of strings.

The H8-II certainly brings back its original mojo with the distinctive ‘Hagstrom tone’. That is as much of a feature with the unique materials used in the construction (particularly the Resinator fretboard and the H-Expander truss rod) as it is with the maple neck and mahogany body.

The base tone is well-defined, balanced and clear, with great harmonic overtones thanks to the octave strings. This adds nice depth to the tone. The two tone slider switches provide various levels of preset mid and high frequency cuts and gain reduction for an additional level of flexibility that isn’t normally found on many basses in the sub-$1,000 price range.

The Hagstrom H8II-TSB is a solid mid-level bass guitar that will give you a wide range of great tones while having a great retro look. The inclusion of octave strings won’t appeal to every bassist, but the proprietary materials, vintage design and solid features used are a great link to that ‘Hagstrom tone’ of the past – all without breaking the bank.