After first rising to prominence with country and rockabilly players in the 1950s, Gretsch guitars have become some of the most famous electric models in the world. Players like Chet Atkins, Eddie Cochran, George Harrison, and Bono have all favored Gretsch’s sparkling, glassy, clean tones and rich saturated sound.

However, for years Gretsch’s product line has started in the under-$1,000 category — meaning many newer players couldn’t afford to experience the signature sound for themselves. The new Streamliner collection, modeled after classic Gretsch models from the 1940s, ’50s, and ’60s, is a more affordable line catering to those players.

The G2420, patterned off the single-cutaway design of Gretsch’s legendary 6120, is one of the flagship Streamliner models. Let’s take a closer look at the details and break down what makes this model one of the top electric guitars under $500. 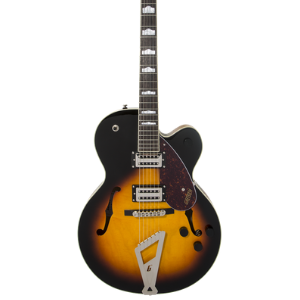 The G2420 features a completely hollow body constructed from laminated maple on the top, back, and sides. The single-cutaway styling and smaller f-holes on the body are both historical Gretsch touches. Inside the body, you’ll find parallel bracing for better resonance. At 2.75″ deep, this guitar can be a bit of an armful! It’s not unmanageable; however, and it grows more comfortable the more you play it. On the plus side, that larger body depth creates lovely sustain and warm acoustic tones. Even if you play without an amp, this guitar sounds great.

The neck is made from nato wood — an Asian tonewood noted for its similar characteristics to mahogany — and set into the guitar’s body with a broad heel joint. The laurel fingerboard features a 12″ radius, great for both broad chording and faster single-note runs. The gloss finish along the back of the neck helps you slide up and down with ease. Finally, the 24.75″ scale length offers a slinky, relaxed feel for smooth bending. 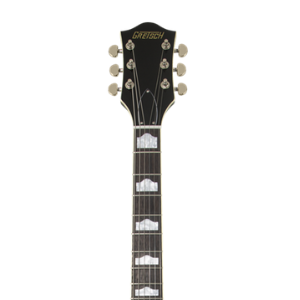 The guitar features a pair of Gretsch’s custom Broad’Tron humbucking pickups; they’re voiced to offer the traditional bright sound of Gretsch’s signature Filter’Tron pickups with a bit more tonal range and warmth. In some ways, these pickups resemble a cross between a Filter’Tron and a Gibson PAF-style humbucker.

The humbucking design also helps counteract some of the feedback you get because of the fully hollow body design. While it’s impossible to completely neutralize the feedback without covering the f-holes, the humbuckers avoid the 60-cycle hum problem that many single-coil pickups create.

In typical Gretsch fashion, the G2420 is loaded with an array of controls. The guitar features four control knobs, with a master volume positioned up by the cutaway and the remaining three down by the tailpiece. Those dials are separate volume knobs for the neck and bridge pickup, respectively, along with a master tone control. The axe’s upper bout also features a standard three-way pickup selector switch.

On the mechanical side of things, the nickel hardware includes a set of Gretsch die-cast tuners and a secured Adjusto-Matic bridge. These do a good job of keeping tuning and intonation stable. The secured bridge here is a critical upgrade from past “floating” Gretsch bridges — many players struggled with their bridges sliding and shifting, especially after taking the strings off to re-string their axes.

Finally, the G2420 comes with either a Gretsch Chromatic II tailpiece or a Bigsby B60 vibrato setup. The hardtail provides a stylish chrome look, while the Bigsby opens up luscious bending possibilities. While the G2420T (the model with the vibrato) is more expensive, it’s a worthwhile upgrade if you like to use the vibrato arm in your playing or want the true rockabilly Gretsch experience.

Historically, Gretsch guitars have often been pigeonholed into a narrow set of genres related to rock and roll. That’s a shame because the Broad’Tron pickups on the G2420 are more than capable of a wide range of styles.

The clean tones here deliver plenty of vintage Filter’Tron character, yet add a bit of warmth and depth you might not find in other models. The hollow body adds some acoustic warmth and resonance as well — with the tone knob rolled off, you could even use the G2420 for jazz.

However, this model delivers screaming tones in more distorted settings as well. The saturated, focused tone sounds fantastic even with the gain cranked up on your amp or when running through pedals. The hollow acoustic chamber also creates nearly limitless sustain; the G2420 outshines many solid-body and semi-hollow guitars in that regard.

Because it is a hollow-body model, though, feedback can be a problem if you’re not careful. You’ll have to keep your hand planted firmly on the strings with this one! If you play with a ton of gain and rely on open, spacey passages in your playing, you can also try to fill the f-holes to reduce some of that unwanted hissing.

The Gretsch G2420 is an outstanding hollow-body model that delivers both quality and versatility at a relatively low price. Though the larger size and retro styling may seem unorthodox for certain players, the sound and playability mean that this guitar deserves a look from players in pretty much any style.