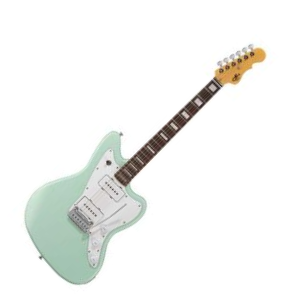 While Leo Fender may be best known for the eponymous company he founded, his career in manufacturing guitars didn't end when he sold Fender to CBS in 1965. G&L Guitars, the company Leo founded with George Fullerton in 1980, has been producing outstanding instruments in Fullerton, California, for many years now. And though the production line is much smaller than Fender's, G&L models, like the G&L Doheny, have found favor among younger players and professionals alike.

The Doheny is G&L's take on the classic offset design of the Fender Jazzmaster. While it borrows many features from Leo's original creation, the Doheny offers a series of tweaks and upgrades that make this instrument outstanding to play. It's not the most affordable instrument, but this guitar offers plenty of features and some serious value for the sub-$2,000 market. Let's take a closer look and see how it breaks down! 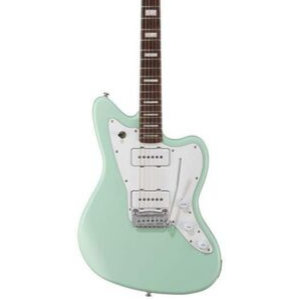 Just like its older brother, the Jazzmaster, the Doheny uses a solid alder body for resonance, sustain, and clarity. If you order a sunburst or blonde finish, the body will be made from swamp ash instead — this wood offers a more vibrant grain pattern than alder for some added visual appeal.

The neck, meanwhile, is made of hard rock maple; you get the option of either maple or Caribbean rosewood for the fretboard. The Doheny features G&L's “modern classic” neck shape, which incorporates a heavy edge roll and slight taper along the length of the body. In terms of thickness, it increases from 0.820″ to 0.870″ as you move towards the body; the 9.5″ radius is versatile enough for plenty of different styles. 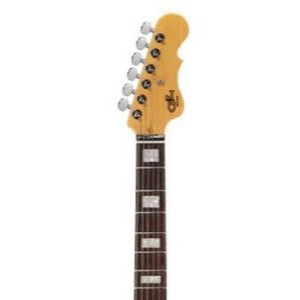 Up until this point, the Doheny mirrors the Jazzmaster in most (if not all) aspects. The styling is nearly identical, and the body and neck use practically the same tonewoods and shapes. The pickups, however, are the major difference between the Fender original and the G&L model.

These pickups take advantage of G&L's trademark “magnetic field design,” which merges ceramic bar magnets with individual pole pieces. That allows players to adjust the output of each pole piece individually, rather than trying to adjust the output of the entire pickup at once. Tonally, magnetic field design pickups are also known for their exceptionally wide range and slightly warm, airy response. Compared to a traditional single-coil, MFD pickups' increased output keeps them quiet and sensitive.

G&L guitars also feature their own unique control system. The three-way selector switch is one of the few things the Doheny has in common with a Jazzmaster. Rather than the master volume and tone controls found on traditional Jazzmasters, however, the Doheny incorporates both a tone control (to roll off treble frequencies) and a bass-cut knob to tighten up your sound. They're both passive knobs — which means that they don't boost any frequencies, only remove them — but they do make the guitar far more tonally versatile. You can play around with both of the knobs in tandem and blend them together for even more unique sounds!

Like many other features of this instrument, the hardware on the Doheny shines. G&L uses a genuine bone nut for this guitar, along with 21 medium-jumbo frets. In an unusual touch, the company dresses the frets with a Plek machine before each guitar leaves the factory. This state-of-the-art machine scans the neck of each guitar, then levels and dresses all of the frets and the nut to the exact action desired. Wood shrinkage and expansion can still occur between the factory and your doorstep — but out of the box, the Doheny still offers one of the most uniform and smooth neck setups you'll find on any brand-new axe.

Behind the nut lies a set of six G&L standard tuners; these do as good a job as you might expect at keeping your guitar in tune for long periods of time. They're not invincible, and the 12:1 ratio isn't quite as fine as some other models in this price range, but they're more than reliable enough for most players. The real star piece of hardware lies at the other end of the scale.

Fender Jazzmasters are famous for their vibrato system, complete with a massive chrome tailpiece and rather unstable bridge. The Doheny scraps that design entirely and opts instead for G&L's unique dual-fulcrum design. That's far closer to a Stratocaster tremolo than a Jazzmaster one, and it offers plenty of range with outstanding tuning stability. It's one of the most unique features about this instrument when compared to the Jazzmaster — and the clean, streamlined look is just a bonus!

It's hard to evaluate the sound of the Doheny without comparing it to its cousins, the Jazzmaster and Jaguar. And while the differences are more tweaks than wholesale changes, the Doheny certainly holds its own and even surpasses its predecessors in many respects.

The MFD pickups on this guitar tilt closer to surf rock jangle and crunch than country twang; on the bridge pickup with the bass rolled off, there's enough snap here to play great-sounding funk rhythm. There's still plenty of bass on tap, though, particularly on the neck pickup. Compared to Jazzmaster single-coils, the Doheny's pickups are a bit warmer and offer a more open, dynamic range that lends itself well to a variety of styles.

Furthermore, the fulcrum vibrato unit is a marked improvement over the traditional Fender offset system — it's rare to find a unit that's so responsive yet remains as stable as this one is. Surf, indie, and even shoegaze players will certainly love this feature!

Overall, it's hard to find any significant flaws in the sound and design of the G&L Doheny. It carries forward all of the hallmarks of the offset style that Leo Fender established at Fender while adding a couple of thoughtful, measured tweaks. These upgrades, while restrained, make a significant difference in the final product; the top-notch fit and finish and outstanding attention to detail make the Doheny an even more compelling bargain. Players across nearly any genre imaginable should take a good look at this instrument.

For more info about the G&L Doheny, click here.