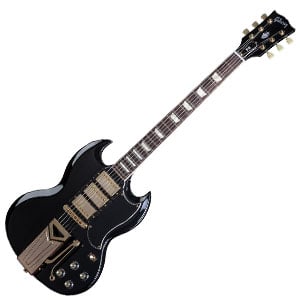 Founded by Orville Gibson in 1902, the company originally manufactured mandolins by inventing the arch-top guitar just 20 years later in 1922. Throughout the 1930s and 1940s, the company would continue innovating, paving the way for most of the classic musical hits we know and love today. But it would be in 1952 when Gibson set the world on fire by developing the Gibson Les Paul, the most famous and sought after guitar on the planet. In 1961, Gibson sought to further modernize guitars and began producing a double-cutaway body design they would call the “SG” at Paul's suggestion, which stands for “solid guitar”. From then on, the SG line has been the most popular guitar line in the world, being used by several iconic musicians, including Eric Clapton, Allen Collins of Lynyrd Skynyrd, Jimi Hendrix, Keith Richards of the Rolling Stones and Dave Grohl of the Foo Fighters.

Throughout the decades, the Gibson SG line has been a reliable set of musical instruments that are the gold standard in design, sound and durability that has kept the company in business to this very day as it continues to seek to improve guitar performance. And this latest guitar is no exception.

The SGS3 Standard is yet another masterpiece in Gibson’s iconic SG line, packing identical qualities of its predecessors with a vastly enhanced tonal spectrum.

Their latest rendition features three smashing humbuckers, which is a rare find in Gibson gits, making it shine as one of their best axes to date due to its unheard of sound complexity.The guitar packs the classic SG body design and elegance that will make you fall in love with it upon first sight, as it has done time and time again. Its body is made of mahagony with a gorgeous gloss nitrocellulose finish, partially covered by its slender black pickguard. The instrument is smoothly extended by its set-in mahagony neck with a Slim Taper profile, on a scale of 24.75 inches. The rosewood fingerboard is rigged with 22 medium jumbo frets and trapezoid inlays, with a 12 inch radius.

This immaculately conceived axe is finished off with a classic headstock equipped with six vintage gold tuning machines. The hardware components on this masterpiece are crafted with the utmost attention to detail, enabling deadly precise intonation and carefree string bending. The bridge slot is furnished with a tune-o-matic tremolo/vibrato system and a vibrato tailpiece. When you consider an instrument of this caliber, you would expect nothing but the best from its electronics, and justifiably so. The SGS3 delivers a striking array of vintage and modern tones due to its versatile pickup configuration. Three gold plated ’57 classic humbuckers, naturally complemented by a three-way switch, a single Master Volume and three Volume control knobs.

This axe is a loaded tone machine, ready for deadly action right out of the box, sporting elegant comfort in your hands. It keeps your tone in check with swift precision, transitioning from low to vigorously high ends is an absolute breeze in your performances. When looking (or listening) at the sound itself, you will notice its limitless capabilities due to its magnificent humbuckers.
You can emulate some vintage classic tones which made this git famous back in the early 60’s, smoothly stay in tune with midrange-y wonders or fit into a shredding setup with scorching solos. The heavenly tones on this masterpiece leave a blazing trail behind its back, making your performances truly stand out and impress anyone in close proximity.

If you’re looking to tap into your potential and explore it to its limits through a breathtaking instrument such as this, look no further. This git offers everything you can ask for, and more. It is well worth its intimidating price tag.