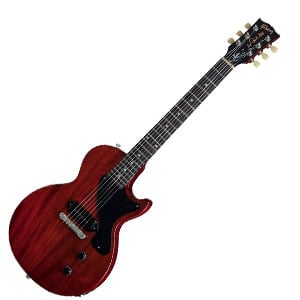 Gibson made history with their Les Paul line of guitars. Along with Stratocaster, this is the ultimate electric ax to have. Over the years, they have developed a wide variety of models under this single name. Ranging from pretty exotic to most blunt ones, every Les Paul offers the essence of what made this guitar, and Gibson along with it, so popular. Les Paul Junior does that as well, in a pretty new way. Even though it’s pretty new, it has shown to be one of the best guitars under a grand. 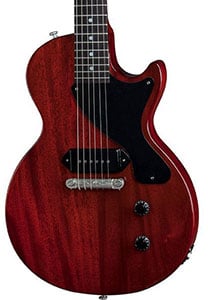 When there’s Les Paul in the name of a guitar, you know exactly what type of body shape to expect. Same goes for Junior here. The difference between this guitar and your most vanilla Les Paul is in the details. It features a flat top instead of an arched one, lacks the intricate pick guard, and so on. With all that said, it’s not hard to realize that Gibson wanted to offer a no-nonsense version of LP. Tonewood of choice comes in form of mahogany, both for the body and the neck. Speaking of which, the neck on this LP sports that slim taper profile many grew to like over the years. The fretboard is standard rosewood and is not bound.

One of the trademark features of any Les Paul design is the Tune-o-Matic bridge. Junior comes packing one of the more basic bridges of this type. It’s a great unit, works well and offers loads of sustain since it sits on a mahogany body. Tuners come in shape of Gibson’s regular set, and those work pretty well. When they look at Gibson Les Paul Junior, many think it’s an affordable version. That’s pretty far from the truth, both in terms of price and quality. This is an outstanding guitar, and as such, features outstanding hardware.

Another place where Gibson has decided to mix things up is the type of electronics they’ve chosen to put on the new Junior. Instead of two humbuckers, they’ve gone for a single bridge humbucker configuration. The pup is a P-90ST Dog Ear unit with alnico slugs. Circuitry it’s wired to is pretty simple, yet effective. You get a single tone knob and a single volume knob. Keeping with the Junior tradition, pots are fitted with black caps and feature dial pointers.

Seeing a single pickup Les Paul might make some wonder just what type of tone this guitar is capable of. Let’s just say it’s not too limited by its electronics. The sound still brings that trademark warmth Les Paul is known for, but in a slightly different package. Junior is a great guitar for rock, blues and similar genres of music. There’s tons of range, clarity, and output to work with even though it’s a passive configuration.

If you’re looking for a no-nonsense Les Paul variant made by Gibson, Junior is probably the first guitar I’d recommend to you right away. It has it all – the looks, the tone, the feel of a high-end Gibson. It is a bit unusual compared to other LP versions, but Junior definitely won’t disappoint even the most conservative users out there.

For more info about the Gibson Les Paul Junior, click here.
For more electric guitars for less then 1000$, click here.