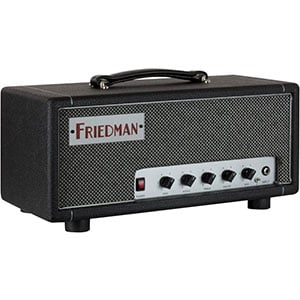 While the name may be slightly less familiar to some than a Fender, Vox or Marshall, a Friedman amp is as respected as the rest. This American brand, established by legendary amp builder Dave Friedman, has been powering some of the biggest names in guitar over the last few decades – from Van Halen to the Foo Fighters.

Their Dirty Shirley is an iconic high-end amp, inspired by British tube amps from the ’60s and ’70s. The Mini Dirty Shirley? Well, that’s based on the full-size beast, only arriving in a smaller package. But it’s bigger than first impressions suggest… As we’ve just touched upon, the Mini Dirty Shirley crams the same power and tone of the full-sized amp into a compact head, which measures just over 18” long and weighs around 20lbs. This will certainly interest players who don’t want – or need – to lug around a full-size Dirty Shirley. With a tough Baltic Birch frame, this American-made amp is built to last.

Unless you are familiar with Friedman amps, you may be a little underwhelmed with the design. After all, it’s a little plain – just a black Tolex head, silver face, minimal controls and the retro Friedman logo sitting in the top corner.

But looks can be deceiving. Under this unassuming appearance, sits a beast of an amp. Inside are three 12AX7 preamps and a pair of EL84 power tubes, which are hand-wired for optimal tone. The package offers a total of 20 watts of power, which is becoming the standard for stage-ready amp heads, especially those used at smaller venues.

This amp also features Friedman’s famed transparent effects loop, accessible around back, which is where the speaker outputs (8 ohms and 16 ohms) are also located. 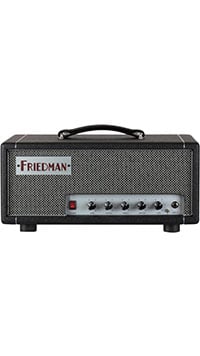 Friedman keeps things very simple in the controls department – you get what you need and nothing else.

At the far left of the front-facing control panel, after your power switch, you are presented with your 3-band EQ (bass, middle and treble), a master volume control and a gain knob. There’s also a three-way gain switch, allowing you to change the gain structure of the amp. But that’s it!

As mentioned, this is a basic amp in theory, although the sound that it produces is nothing short of epic. Dialing in a good tone is hard not to do. There is plenty of headroom for rich cleans when the gain switch is off. Not completely devoid of grit, but full, clear and mellow.

It’s called Dirty Shirley for a reason, and this amp is begging to be played with the gain turned up. Although, you don’t need to go much past the midway point on the knob to find enough overdrive for classic British rock. It’s thick and aggressive, with everything from power chords to lead licks belting out with great clarity and response.

You can crank up the gain all the way for a fat, super-saturated tone that accommodates all styles of heavy rock, with enough beef for modern metal. There are no included effects on this simple amp, yet it takes pedals extremely well, so throwing a boost and reverb pedal into the excellent effects loop really hits the spot on stage.

Truth be told, apart from the size, there’s nothing mini about this amp. The thick, sweet tones pouring from whatever lucky cab that gets to sit underneath it will satisfy everyone from vintage British rock enthusiasts to modern metalheads. Very versatile. If you demand more control over your sound and onboard effects, there are better amps in this premium price range. But, if you appreciate the simple things in life and want to experience the joy a Friedman amp can bring, this is a great way to start.