It's hard to find a name more famous in the guitar world than Fender. Since the company's origins in the early 1950s, Fender's revolutionary solid-body designs have become some of the most famous electric models in history.

Even by Fender's standards, the Stratocaster has become an unbelievably popular guitar. The instrument's beveled curves and three single-coil pickups have made it the favorite axe of players in every genre imaginable, from country and rock and roll to funk, indie, and even metal.

Fender's newer Player Series models bring the essence of models like the Strat to players at a more accessible price point. These aren't Custom Shop-level axes, but they provide plenty of features and offer outstanding value for their sub-$1,000 price tags. The Player Series Stratocaster is a perfect example of the series as a whole — it's focused and thoughtful, staying true to the heritage of the instrument while including a couple of exceptional modern touches. Let's take a closer look and see how this axe stacks up to the competition! The Player Strat uses a solid alder body; alder is Fender's most common body wood, and it's known for its clear presence and relatively neutral tonal profile. The guitar comes in a variety of different finishes, ranging from Fender classics like buttercream and sunburst to more adventurous options like capri orange and tidepool blue.

While colors might seem like an auxiliary feature, on this guitar they're much more — depending on your choice of finish, you'll get this guitar with either a maple or a pau ferro fretboard. Certain color schemes offer the option to pick between the two, while others don't. Maple is a classic fretboard wood, which beautifully accentuates Fender's high-end sound, while pau ferro (a species that's similar to rosewood in tone and feel) is a bit smoother and emphasizes the low-end and midrange instead.

No matter which option you pick, the neck is shaped with a slim “C” profile and finished in satin, rather than the gloss on the body. This neck shape is far from the thickest you'll find — it is a Fender, after all! — but it's got enough meat to grab onto as you execute bends or fret complex chords. The modern 9.5″ radius also helps you move quickly and effortlessly to different positions up and down the neck. 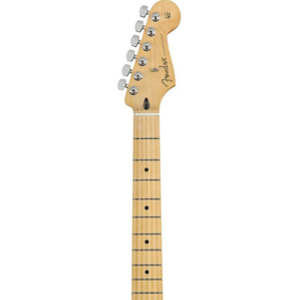 Like all Strats, this axe comes outfitted with three single-coil pickups. The Player series features Alnico-V pickups in all three positions; these models are a bit more powerful and sound hotter than the weaker Alnico-II and Alnico-III versions. The effect is particularly noticeable on the bridge pickup, where most players want a punchy sound with lots of bite. These pickups deliver that in spades!

If you don't like the three single-coils or simply want a thicker, more aggressive sound out of the bridge pickup, you can also purchase a Player Series Strat with a humbucker slotted into the bridge position. This is a far less common configuration than the standard trio of single-coils, but some guitarists prefer the extra bass response, especially if you play styles that rely on lots of distortion.

Outside of the pickups, the Player Strat borrows the control configuration of all other Stratocaster models — with one noticeable difference. There's a five-way switch that selects between the pickups and blends two of them together in the middle positions. You'll also find the standard volume control and tone control for the neck and middle pickup together. The second tone control, however, adjusts the tone of the bridge pickup here; most other Strats feature a tone control for the middle pickup instead and leave the bridge without a dedicated knob.

If you look along the iconic six-to-a-side Fender headstock atop the Player Strat, you'll notice a set of six die-cast sealed Fender tuners. These do a fine job of keeping your tuning locked in; they'll need regular adjustments to stay perfectly in tune but otherwise work well. The strings then pass over a synthetic bone nut and run by 22 medium-jumbo frets before arriving at the bridge.

While this may look like a standard Strat bridge, it harbors one important difference from plenty of other models; it uses a modern two-point vibrato system rather than the vintage six-screw design. This creates a noticeable improvement in smoothness and feel as you bend notes using the vibrato arm.  Other than that, everything remains the same — you can still adjust the action and intonation of each string individually and keep the axe sounding great at all times!

One of the main gripes about the pickups on budget guitars is that they sound shrill, thin, or tinny. Thankfully, there's almost none of that sound on the Player Strat. The Alnico-V magnets deliver trademark Fender top-end but don't sacrifice sound in the bass range, either. They're smooth and composed, offering a great tonal palette for players in all genres to build from.

That's not to say, however, that these pickups sound generic! There's still plenty of quintessential Stratocaster character here; the out-of-phase positions provide plenty of quack and honk, while the bridge is pointy with plenty of bite, and the neck pickup is butter-smooth. Through a cranked amp, the Player Strat responds with some surprisingly rich saturation; there's plenty of growl and bite on offer here should you want to take advantage of it.

It bears repeating that these still don't approach the level of, say, Fender's Custom Shop models — they lack a tad bit of depth and aren't quite as harmonically rich as some of the models at the top of the catalogue. But considering that many of those other guitars cost nearly five times the price of this one, it's hard not to be extremely impressed with the quality on offer here.

Fender's Player Series Stratocaster is a triumph for beginners and players on a budget alike. It delivers plenty of Fender character while sounding so good it could easily be mistaken for a much more expensive axe. It's not a perfect guitar, and it might not offer the fit and finish quality of some high-end instruments, but it's an outstanding value and a great-sounding guitar at any price point.

For more of the best electric guitars under $1,000, click here.