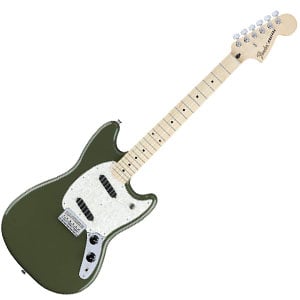 When it comes to Fender, the Strat and Tele always steal the limelight. However, for some players, one of the iconic brand’s other shapes is more appropriate – the Fender Mustang being one of them. The Mustang has been around since 1964; its popularity peaking when Kurt Cobain adopted it as his axe of choice in the mid-1990s. Fast forward twenty years and this relatively new iteration – part of Fender’s Offset Series – comes in at a reasonable price and is a worthy addition to our chart on the best guitars for players with small hands. Today, we are taking a closer look… Starting with the aesthetics and build, and the body itself naturally sports the classic Mustang shape – not as famous as a Strat or Tele, but just as distinctive with its curvy offset double-cutaway design. This model is made from solid alder and finished in one of three glossy finishes, including a unique Olive Green, as well as more traditional Black or Olympic White paintjobs.

The Mustang features a reduced 24” scale length, which makes it easier for smaller players to enjoy, although there remains enough space so the fretboard doesn’t become too cramped. The playability is complemented by a lovely C-shaped maple neck, which features a swift satin finish and 22 medium jumbo frets.

With the smaller scale, it’s a lighter weight than many full-sized guitarists may be used to, which is why thrashing around on stage with one is so pleasurable! Yet, even with the affordable price tag, it feels reliable and well made, being built in Fender’s respected Mexican facility in Ensenada. So, it’s a traditional Mustang in the design department – what about the hardware? This version sports two slanted Mustang single-coil pickups at the bridge and neck positions, just like the original. Controls are very simple, with just a master volume and tone control on the chrome control plate, with a three-way selector toggle further up on the pickguard.

The rest of the hardware is pretty standard here and what you would probably expect from a Fender in this price range. At one end you’ll find a string-through-body fixed Strat-style bridge, while the headstock is home to a set of sealed chrome tuners.

Guess what – it sounds like a Mustang! With stock pickups, you won’t find a high-end tone, but there is still good power here. Played cleanly, it’s well rounded and bright with the classic Strat single-coil sparkle that’s perfect for country and funk, although it is simple to find punchier, crunchier tones that are more suitable for blues, alt rock and punk. Of course, being single-coils, excess noise can be a problem as you crank up the volume, but it’s not enough to put us off.

Note that, for the more rock-inclined, the Mustang 90 (around the same price) may be more suitable, with two soapbar pickups offering a fatter tone than the standard single-coils.

For the price, this guitar is a bargain. While the set of basic pickups leaves a little room for improvement in the tone department, the overall sound remains worthy of everything from practice to smaller gigs. However, the solid build and playability – especially for players with smaller hands – makes this Mustang a prime candidate for modding and upgrading.

For more info about the Fender Mustang, click here.
For more guitars for players with small hands, click here.