It must be tough for Fender to try to improve the Mustang when it’s been perfected so many times before. However, they’ve done it again with the Mustang GT 40, which is crammed with power, versatility and technology, all at a surprising under $300 price tag. Let’s take a closer look to see what’s new. 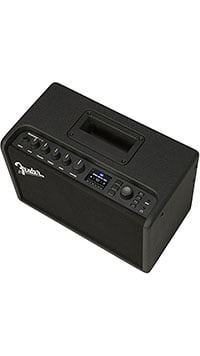 The Mustang GT 40 is packed with controls, allowing you to play around to your heart’s content. Located on the top of the amp, you’ll find five chunky plastic control knobs for gain, volume, treble, bass and master volume. There’s a small UI LCD screen to display the amp and effect settings, as well as an encoder, three layer buttons, and other buttons for FX, menus and more. You can also control this amp with a footswitch, although it’s not included at this price. The Mustang GT 40 is packed with features… where do we start? Firstly, let’s say it’s a great-looking model. There’s nothing too extraordinary in design, but it’s incredibly sophisticated with an all-black vinyl body and black grille cloth, with the iconic Fender logo offset to the left. Under the hood this amp features a pair of 6.5” Fender-designed speakers offering a total 40 watts of power.

As for sound options, there’s so much on offer with 21 classic amp models and 46 different effects, while a looper with 60 seconds of record time gives you ample opportunity for some dramatic soundscapes. The possibilities are endless, especially when you factor in the Wifi connectivity, granting access to everything from Fender artist-created presets to the latest firmware updates. The Bluetooth connectivity also allows for streaming stereo music wirelessly from any device, allowing you to play along to your favorite tracks.

Whether you’re looking for a legendary Fender tone – such as the ’65 Deluxe, ’57 Champ or ’59 Bassman – or want to create something completely new, this amp has the tone for you. With the range of amp models, artist presets, plethora of controls and nearly fifty effects, there’s something for everyone, from warm vintage jazz to the deepest darkest djent. For a digital amp, it’s also very responsive to the player’s dynamics. The 40 watts of power is more than enough for smaller gigs, while the lighter weight makes it great for gigging guitarists. The fact you can control it with the Fender Tone app just adds to the convenience.

While it has the power to gig and the tonal flexibility to offer performers everything they’d need on smaller stages, the Mustang GT 40 will probably appeal more to players who want a studio amp or simply something for the living room that allows them to conjure up whatever tone takes their fancy. Whatever it’s used for, it more than justifies its price.