While it might not have the notoriety of models like the Telecaster and Stratocaster, the Fender Duo-Sonic has survived as a part of the company's product lineup in various incarnations since the mid-1950s. Originally marketed as a starter model, the Duo-Sonic's offset body, and smooth single-coil pickups won the instrument favor with plenty of professional guitarists, particularly within the New York alternative and funk scene during the 1980s.

The latest incarnation of the Duo-Sonic sticks most closely to the original, early-1960s version of the guitar. But while it may hold plenty of vintage DNA, this Duo-Sonic is anything but soft. In fact, it's hard to beat the combination of value and quality on offer here. It's certainly one of the best electric guitars under $500; let's break down the details and take a closer look at how it stacks up! Like most Fender guitars, the Duo-Sonic uses a solid alder body. It's the shape and the finishes that set this particular model apart. The Duo-Sonic's body combines the horns of a Stratocaster with the offset waist of the Jazzmaster and Jaguar; the sleek design creates a well-balanced guitar that feels as good as it looks! Speaking of looks, the attractive pastel colors — surf green, capri orange, and Torino red, just to name a few, lend this guitar some vintage panache.

Along with the design, this axe boasts a 24″ scale. It's only 1.5″ shorter than the standard Fender length of 25.5″, but it makes a noticeable difference in playability and feel. New and younger players will appreciate the extra slinkiness, while more advanced guitarists will be able to use heavier-gauge strings and achieve a meatier tone without sacrificing any speed along the neck.

The neck utilizes Fender's new “C” shape along with a 9.5″ radius. In contrast with the vintage feel elsewhere, the neck feels modern and quick; players of all genres should appreciate how this accommodates both chords and single-note playing. 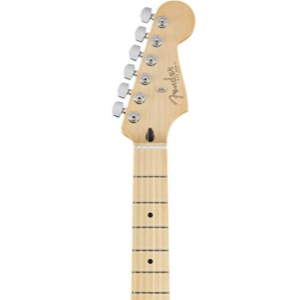 The single-coils provide plenty of top-end sparkle and clarity, reminiscent of Fender models from the 1950s and mid-1960s. However, they don't sound like obvious copies of other Fender pups — these fall somewhere between Stratocaster, Telecaster, and Jaguar pickups in terms of sound and frequency response. The humbucker, meanwhile, injects some extra girth and midrange bite to the bridge position.

One unique advantage of the Duo-Sonic is the wiring. Most other guitars wind the pickups in parallel, which produces a blended sound when you combine the two pickups. This axe, however, winds the pickups in reverse polarity, which runs them like a giant humbucker when you select both of the pickups. If you want single-coil pop and sparkle in the bridge but still want to access the darker, thicker sound of a humbucker, the reverse winding is a major advantage.

Beyond the pickups, the Duo-Sonic offers a standard control layout: a three-way switch toggles between the pickups, while master tone and volume controls help you blend in your perfect sound.

Despite its sub-$500 price tag, the Duo-Sonic utilizes a full complement of standard Fender hardware. The tuners are a set of Fender standard keys with sleek metal buttons; they hold the strings in tune as they pass over 22 medium-jumbo frets. While the first Duo-Sonic instruments only had 21 frets, the extra space is a major boon for players who love to solo high up on the neck.

At the other end of the scale, the Duo-Sonic features a unique bridge that borrows the saddle setup of a Stratocaster with a svelte hardtail string-through design. Because you can adjust the action and intonation of each string individually, this bridge keeps the Duo-Sonic locked in tune even over long playing sessions.

In keeping with its unique set of pickups, the Duo-Sonic delivers a sound that borrows from Fender's rich heritage yet establishes a character of its own. When played clean, the single-coils shimmer and jangle with top-end clarity in spades. They're far from the thickest-sounding pickups around, but they aren't thin or tinny. If you play aggressively, they provide plenty of snap and sizzle, making them great for genres like funk and indie.

The bridge pickup, in particular, is a real highlight of this guitar. It melds the twang of a vintage Telecaster with the quack and force of a Stratocaster — at times, you can even detect a bit of offset punch in the mix. When distorted, the Duo-Sonic's single-coils rip through a mix with tons of saturation and throatiness. They retain their trebly character and surprising clarity along with the jagged, serrated sound, but don't reach piercing or shrieking levels of bite. It's a distortion sound that's useful for styles from punk to classic rock and even hard rock.

Though this is merely the latest example in a long line of Duo-Sonic guitars, the modern incarnation is a guitar that provides plenty of spunk and a high build quality for an extremely affordable price. No matter what genre you play, this is an outstanding option without an exorbitant price tag.

For more info about the Fender Duo-Sonic, click here.