Fender Champion 20 Review – The Perfect Blend of Versatility and Tone 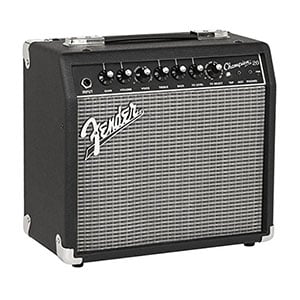 Fender amps are among the most legendary in the world. From the company’s early tweed amp models to their Blackface and Silverface offerings of the ‘60s and ‘70s, the California manufacturer has defined the sound of popular music for decades. Geared towards beginners and players needing a practice amp, the Champion 20 offers those classic tones at a much more budget-friendly price. Let’s delve into why this one proves one of the best amps available under $100. 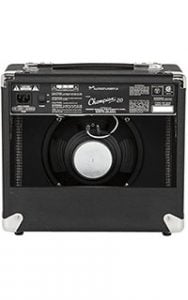 While it’s aimed at beginner and budget-conscious guitarists, the Champion 20 offers models and effects that are anything but basic.

The amp gives players digital models for three tweed Fender amps, three blackface Fender voicings, three ‘British’ Vox models, and three metal voicings. The variations in gain between each of the three models in each category means you’re able to fine-tune your sound just how you like it.

On top of that, this amp also features effects like reverb, delay, echo, chorus, tremolo, Vibratone, and wah. In practice, most of these are pretty basic – there aren’t settings to adjust the rate or depth of any effects, just the level.

However, the reverb, Vibratone, and tremolo are solid, and all the effects are a great way for newer players to experiment with different tones without having to shell out hundreds of dollars on a pedalboard. The control setup on this Fender is pretty straightforward. There’s only one channel, with standard volume and gain controls, as well as bass and treble EQ knobs. A 12-way control to select the amp voicing follows this.

While there are 12 distinct settings around the dial (in other words, you can’t blend different voicings), the pot moves freely rather than snapping into place at each voicing. A small light next to the dial distinguishes what voicing you’re on. As you change amp models, the light will change color from green to yellow to red for each of the four categories. It takes a few minutes to get used to, but is very intuitive.

Finally, the Champ 20 features an effects dial, with another effects level knob to control the influence on your sound. Aux and headphone inputs allow you to play over jam tracks and practice quietly.

For a sub-$100 solid-state amp, the Champ 20 sounds unbelievable – it’s a testament to just how far budget solid-state amps have progressed in the past 10 to 15 years.

The Fender amp models (tweed and Blackface) sound convincingly like their original inspirations, while the British voicings offer a nice dollop of punch and bite. The Metal voicings are so caked in distortion that only hard rock and metal players may use them consistently, but they also offer solid sounds.

However, the Champion 20 won’t exactly fool you into thinking you’re playing a tube model. The 8” speaker can make the sound boxy or thin at times (though it has no problems pumping out high volumes).

Though the amp models are advertised as different variations on classic tones, turning the amp select knob through each section really just ups the gain without making a noticeable difference in voicing. While the effects are certainly fun to experiment with – especially for beginners just getting a feel for the sounds they can get out of a guitar – most are pretty flimsy. Players might be better served looking into affordable pedal options like Boss, MXR, or Tone City for sturdier effects.

Players looking for a $500-plus tube sound at this budget price will be disappointed – but those players also miss the point of amps like the Champion 20. This isn’t an amp for a gigging pro, after all. For its budget price, this amp provides outstanding tones and offers new players a way to experiment with a plethora of effects for very little investment. This is one of the absolute best amps under $100 on the market and merits consideration in any search for a budget amplifier.