Fender CD60CE – Solid Foundation With By a Trusted Name

Fender’s stint in the affordable range is not something they are particularly known for. After all, that’s what Squier is for. However, they have chosen to do affordable, entry level acoustic guitars under their own brand. One such instrument is the Fender CD60CE. It’s a no thrills acoustic electric guitar which offers a solid foundation to anyone looking for a good beginner guitar. It’s no wonder this particular model is among the most popular and best performing beginner acoustic guitars on the market. 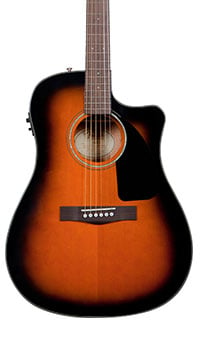 What we have here is the standard dreadnought body with a cutaway. Fender kept things simple with this one, that’s for sure. Tonewood of choice comes in form of laminated mahogany all around. Having so much laminate on a guitar is not something to write home about, however there’s a good explanation. In order to deliver an acoustic electric guitar within the given price range, some tradeoffs had to be made. CD60CE comes with scalloped X-bracing, which is a big plus. Overall the body is well made, well fit together, thus minimizing the effects of its laminate nature with a lot of success. Neck is a also a mahogany piece which features a nice rosewood fretboard and compensated saddle.

Fender chose the Fishman Isys III for CD60CE. This system comes with a decent on board active preamp as well as a tuner. In terms of tone shaping. you get a three-band EQ to work with. There’s enough juice in the preamp to make a real difference on tone. Fishman Isys III is nowhere near their best model, but it’s more than capable of accurately reproducing the tonal qualities of CD60CE when you need amplification. 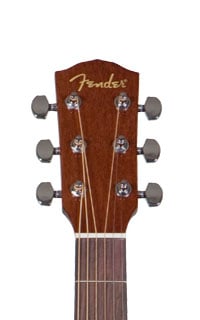 As you could expect, the hardware is right around the industry’s average in this price range. You get a rosewood bridge with a composite saddle. On the other end of the guitar, Fender installed a set of die cast tuning machines which get the job done so long as you don’t push the guitar outside its comfort zone. Tuning and intonation retention is there, allowing you to focus on other, more important things when you play this guitar.

For a laminated cutaway dreadnought, CD60CE brings a fairly surprising performance. You would expect the tone to be lacking in some ways, but that is simply not the case. Would you want to compare this Fender to a top tier Taylor? You definitely wouldn’t, but viewed through the prism of its immediate competition, CD60CE packs a mean punch. Steady throughout the frequency range, this Fender delivers a balanced tone color with enough warmth and projection to satisfy even the more unforgiving guitar players out there.

Even though it definitely has some flaws, Fender CD60CE is among the best deals on the market at the moment. The type of performance and package of features you get for the money is simply too good to ignore. A decent solid top would do it wonders, but this bad boy is capable of getting the job done as it is.