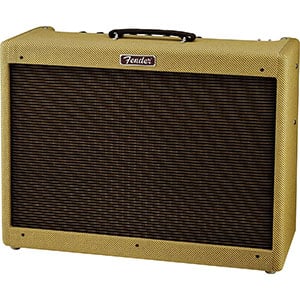 Today we are taking a look at the Blues Deluxe Reissue, which is part of Fender’s new Hot Rod Series. Shrewd observers will quickly notice that this popular tube-driven combo amp is an update of an update – the modern version of the 1993 Fender Tweed Series, which was a tribute to the old 1950s Deluxe amps. Got that? This new Blues Deluxe Reissue is undoubtedly a blues amplifier first and foremost, yet it has plenty to offer guitarists across the spectrum… Fender sticks with the original design by placing the controls on a chrome control panel towards the back of the amp – a little inconvenient to read if the amp is placed right next to a wall, but a small price to pay for the authenticity. Besides, these controls are responsive and add flexibility to your tone, with each channel equipped with 3-band EQ (middle, bass and treble), along with reverb, presence and master volume controls. If you are familiar with the ’50s Fender Deluxe, you can see how this 21st Century upgrade is inspired by the original, with its creamy tweed jacket and a rather solid construction, which makes it feel like a reliable combo amp to partner with on the road. Plus, with 40 watts of power, driven by two 6L6 power tubes through a 12” Eminence Special Design speaker, it’s more than capable of holding its own on stage.

Several improvements have been made to bring it up to date with the modern blues guitarist, with upgraded circuitry leading to better overall sound quality and more reliability. Yet, it’s not too refined – it still retains the classic charm this amp has always shown.

So, does it sound as good as it looks? In short – yes it does! It’s simple to dial in a fat blues sound, and proves warmer and bluesier in tone than the original Hot Rod Deluxe. Plus, due to the advanced circuitry, it isn’t plagued by the hum and excess noise the original suffered.

It sounds obvious, but with this amp, Fender really delivers that all-American sound they are known for. With a generous 40 watts, there is plenty of headroom for those pristine Fender cleans – and boy, are these clear – although it’s just as easy to bring in some biting blues growl. Meanwhile, the built-in reverb is decent, although not particularly deep.

There’s no surprise to hear we love this amp! The Blues Deluxe Reissue offers the warmth and style of the original, but with some modern upgrades that make it a must-have for the blues stage performer. Yet, this shouldn’t limit it to blues guitarists – classic rock and country guitarists will also find a lot of use with this bad boy!